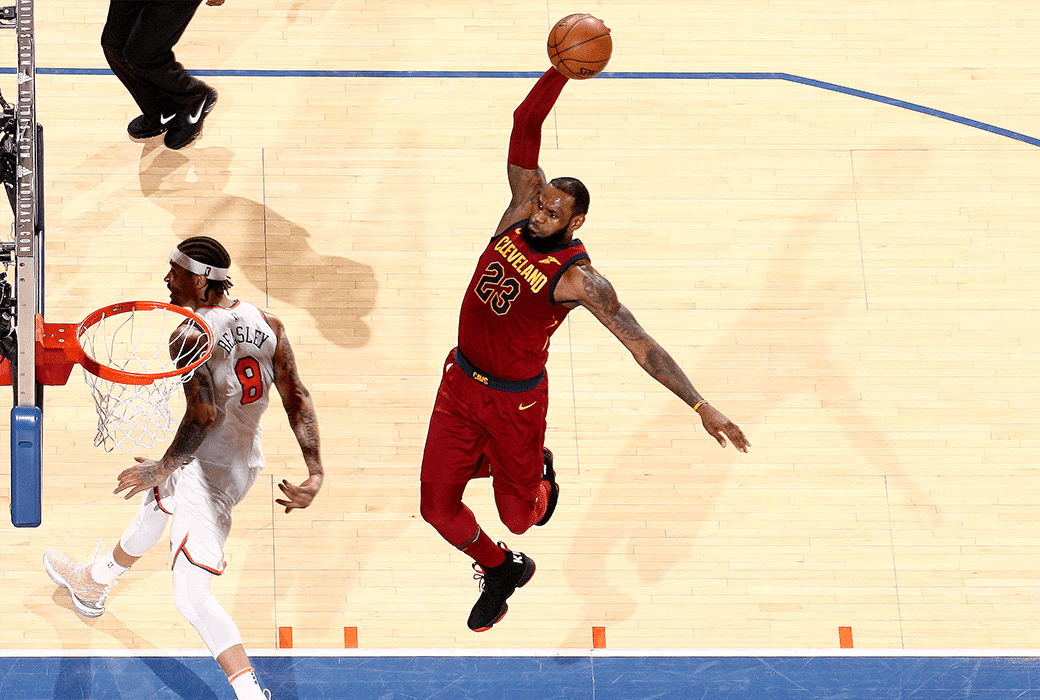 LeBron James didn’t disappoint in his first game back at Madison Square Garden since calling himself the King of New York, racking up 26 points, 11 assists and six rebounds as the Cavaliers took an early lead and never looked back.

Kevin Love knocked down six 3’s en route to a 28-point outing and Jose Calderon and J.R. Smith each added 16 off the pine.

Knicks rookie Frank Ntilikina scored a career-high 17 points in 8-for-16 shooting from the field and Michael Beasley dropped 20.

Toronto continued to roll behind the scenes, extending its franchise-best win total to 59 after outscoring Detroit 51-38 in the second half. Jonas Valanciunas dropped 25 on 11-for-13 shooting from the field to lead the effort.

The Pistons were without the services of its star frontcourt duo of Andre Drummond and Blake Griffin.

The Bulls took sole possession of seventh place in the Tankathon rankings as the Nets completed their first three-game win streak of the year.

Allen Crabbe stole the show on his birthday, dropping 41 points on just 15 field goal attempts. Crabbe became the first player in 18 years to score at least 40 points on 15 or less shots.

Allen Crabbe just became the 10th player ever to score 40 points on 15 shots or less and the first to do it in over 18 years.

The Thunder can exhale now. Despite falling behind 23-8 early on, Oklahoma City was able to claw its way back into the contest thanks to big nights from its all-star duo of Russell Westbrook (23 points, 18 rebounds, 13 assists) and Paul George (27 points). The Thunder outscored the Heat 39-12 in the final period of play–the 27-point deficit was the third-largest for a single quarter in Miami’s history.

Westbrook’s rebounding effort put him back into striking distance of averaging a triple-double for the year. He needs 16 against the cellar-dwelling Grizzlies in the regular season finale to hit the mark.

Hassan Whiteside was a bright spot for the Heat, scoring 16 points on 8-for-10 shooting while grabbing eight boards and swatting his way to three blocks.

Malcolm Brogdon was only able to make one shot in his return to the rotation, but the quartet of Eric Bledsoe (20 points, 11 assists, 12 rebounds), Khris Middleton (18 points, six assists, seven rebounds), Shabazz Muhammad (22 points, eight rebounds) and Jabari Parker (16 points, nine rebounds, two steals) did more than enough to take care of business.

The Timberwolves got off to a sloppy start, but a 36-point second quarter set the tone for the rest of the night as Jeff Teague and Karl-Anthony Towns combined for 48 points. Derrick Rose added 13 points and three dimes off the bench.

The Spurs extended their postseason streak as Monday night’s win clinched their 21st straight appearance. Manu Ginobli dropped 17 points off the bench to lead the way.

The world was pretty different the last time San Antonio missed the playoffs: Notorious B.I.G. was still alive, WiFi had just been introduced, Harry Potter hadn’t hit the United States yet and Tiger Woods had just become the youngest golfer to ever win the Masters.

The Nuggets needed a win to keep its season alive and it did just that, turning on the clamps as the Trail Blazers shot just 33 percent from the field and 21.2 percent from behind the arc. Portland was only able to muster up 13 points in the fourth quarter as Denver overcame the three-point deficit it faced heading into the final period.

Nikola Jokic recorded his 10th triple-double of the year with 15 points, 20 rebounds and 11 assists to lead the way.

The Denver Nuggets' season is still alive thanks to Nikola Jokic's 10th triple-double of the year https://t.co/v2ZsgPXG9s

New Orleans punched its ticket to the postseason after a strong outing from its starting five–all four players to go at least 30 minutes had a plus-minus of at least +20.

🚨 RAJON RONDO OFF THE GLASS TO ANTHONY DAVIS WHO COCKS IT WAAAAAAY BACK SHEESH 🚨 (via @PelicansNBA) pic.twitter.com/Q6kmHGR0Vr