Post Up: Kawhi Leonard, Bradley Beal Duel Out in D.C. 🔥 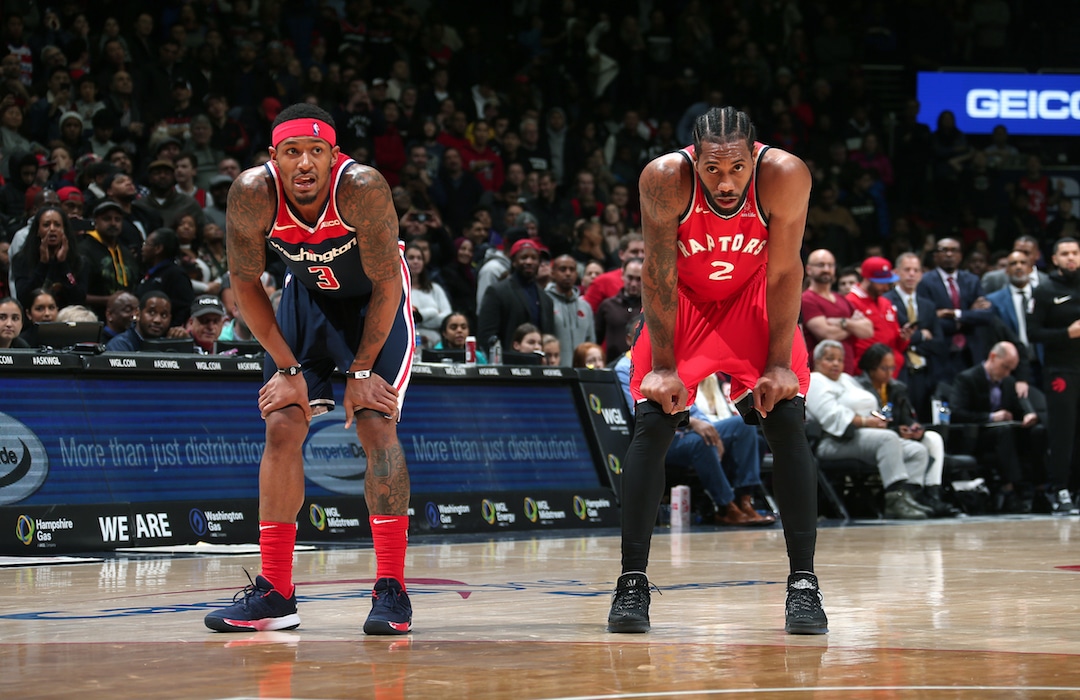 Giannis Antetokounmpo made it a special return for Mike Budenholzer, the former Hawks coach that’s now at the helm for the Bucks. Antetokounmpo scored 33 points in Atlanta and Eric Bledsoe had 24 points and 10 assists. The Bucks now have the second-best record in the Association.

The Greek Freak finished the weekend off with 3️⃣3️⃣ points and the W. 😤 (via @NBATV) pic.twitter.com/fXkE4mGKN2

Emmanuel Mudiay had a look at the end of regulation to take it to overtime, but the Knicks fell on their home court. Four of five starters finished in double digits as Joel Embiid led the way with 26 points. Ben Simmons was one dime shy of a triple-double but finished with 20 points and 22 rebounds. Kevin Knox had a career-high 31 points. This was the Sixers’ seventh straight win over the Knicks.

Ben Simmons balled out in the Big Apple. 🔥 (via @NBATV) pic.twitter.com/9RbmYYaTev

Both Kawhi Leonard and Bradley Beal dueled out in D.C. Leonard scored 41 points and 11 rebounds, and Beal had 43 points, 15 assists and 10 rebounds as the Raptors got the road W in double-overtime. Leonard had 13 straight points in the fourth quarter and in OT.

Beal joined Oscar Robertson as the only player to record multiple 40-plus point, 10-plus rebound and 15-plus assist games in a season.

BIG duel out in DC. 41 points and 11 rebounds for Kawhi Lenoard and 43 points, 15 assists and 10 boards for Bradley Beal. (via @NBA ) pic.twitter.com/34VpfdSItg

The Magic closed the game on a 20-6 run in the fourth quarter to get the win at home. Nikola Vucevic and Aaron Gordon had 22 points apiece. Terrence Ross had 17 off the bench for Orlando. James Harden had a near triple-double with 38 points, 12 rebounds and nine assists. This was Harden’s 16th straight game with 30-plus points.

Stephen Curry went off for 48 points, knocking down 11 3s, Sunday night in Dallas. Kevin Durant also had 28 for the Dubs. With the game tied at 114, Curry called his own number, broke down his defender and hit his final three-pointer of the game.

Mavs guard Luka Doncic had 26 points, his fourth straight game scoring 25 or more points, and joined Curry (5 games) as the only rookies in NBA history to do that.

.@StephenCurry30 put on a SHOW tonight in Dallas. 🍿

Peep his 1️⃣1️⃣ made three-pointers. (via @NBA) pic.twitter.com/y0V6WGl5h3

Steph Curry with the DAGGER in Dallas! 🗡 (via @NBCSWarriors) pic.twitter.com/Oe4ldcGNSK

Nikola Jokic had 40 points (season-high), 10 rebounds and eight assists in the Mile High City. Jamal Murray added 24 of his own as this was the Nuggets’ 12th home win in a row. Damian Lillard had 26 points for Portland.

The Lakers went into the fourth quarter trailing by 10 and would cut it to three off a Kyle Kuzma triple with 22.6 seconds left in regulation. Kuzma had 29 points in the loss.

All five of the Cavaliers’ starters finished with double-digit performances, as Cedi Osman was the team’s leading scorer with 20 points. Tristan Thompson posted 15 points and grabbed 14 boards. The win on Sunday also snapped a 12-game losing streak for Cleveland.

The Young Bull dancin’ to the cup! 😱 (via @NBA) pic.twitter.com/4E1UD4owUN