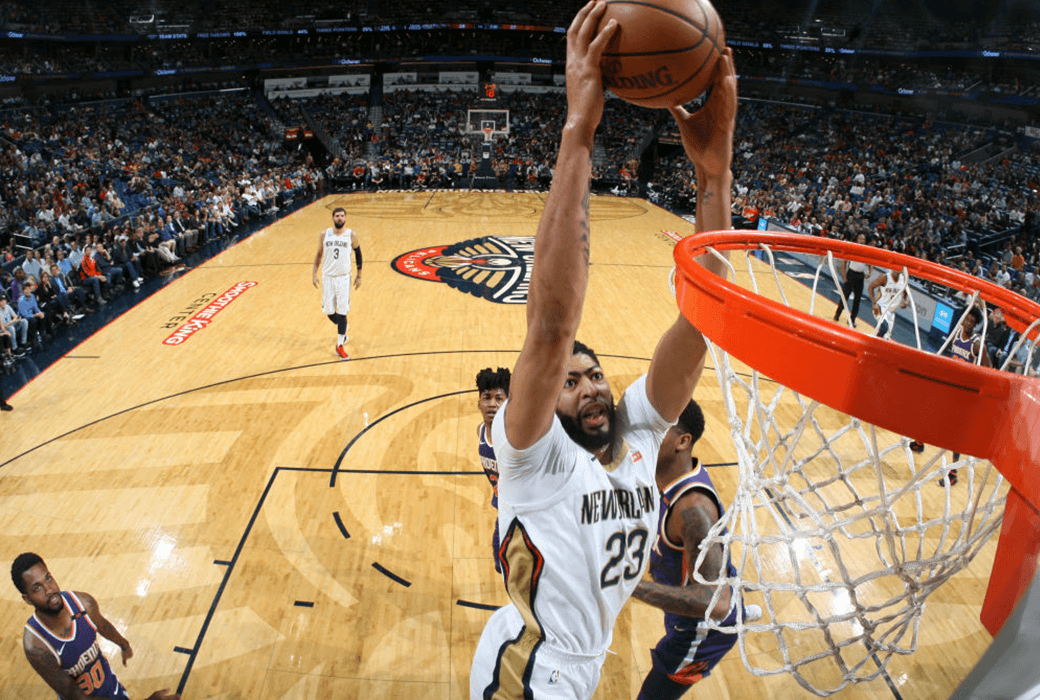 Emmanuel Mudiay scored 14 first quarter points as the Knicks raced out to a fast start and actually held the lead at halftime, but a 39-18 onslaught from the Warriors in the third quarter put the game to bed. Klay Thompson led all scorers with 26 points on 9-of-13 shooting from the field.

yo who taught JaVale how to do that..?(via @warriors) pic.twitter.com/rPirfjIirk

The Lakers turned in a stellar offensive showing despite only a single player scoring 20 points or more–Brandon Ingram with 21. Nine different players scored at least 10 as the Lakers came out strong and never looked back.

Lonzo Ball’s strong shooting continued as he went 4-of-4 from the field for 13 points, seven rebounds, five assists and three steals in just 24 minutes with a +18 plus-minus.

The Celtics got 52 points out of the bench and a team-high 25 from Kyrie Irving as Boston led by 26 at halftime. JaMychal Green had 21 points and 11 rebounds for Memphis.

Kyrie is out here turning lost dribbles into buckets…

Best handles in the NBA? 🤔 (via @Celtics) pic.twitter.com/eIIWry2wva

Jaylen Brown hits ‘em with the spin 🔄 and goes coast to coast 🌊 (via @Celtics) pic.twitter.com/YuI4nPtHnL

The Nets stole the show in a crucial matchup for NBA Draft Lottery balls as rookie Jarrett Allen had the highlight of the night with his posterizing dunk over fellow rook Lauri Markkanen. Allen finished with 18 points and nine boards in just 23 minutes on the floor.

JARRETT ALLEN JUST PUT THE HAMMER DOWN ON LAURI MARKKANEN 🔨 (via @DefPenHoops) pic.twitter.com/kzIrJLK6Pb

The post-Blake Griffin trade magic is starting to fizzle out for the Pistons as the squad delivered a paltry 38.3 percent shooting night.

Toronto’s dynamic duo of Kyle Lowry and DeMar DeRozan each scored 20 points to lead all scorers.

SLAM 214 cover co-star Anthony Davis has been putting up insane numbers over his last six games, but none quite as impressive as the 53-point, 17-rebound, five-block performance and the ‘W’ he delivered against the Suns. Jrue Holiday added 20 points and Rajon Rondo dished out 12 assists.

It didn’t come easy for New Orleans, though, as Devin Booker turned in a 40-point, 10-rebound and seven-assist night for Phoenix.

Oh, and the Pelicans are 6-0 in that stretch. 💯 pic.twitter.com/TEJtL93aSC

Russell Westbrook and Carmelo Anthony struggled with their shot, but 26 points from Paul George, 16 from Steven Adams and four bench players in double-digits allowed Oklahoma City to bounce back from a tough loss in Oakland.

Evan Fournier and Jonathon Simmons each scored 19 for the Magic.

The Pacers got solid nights out of Victor Oladipo (21 points, 8-for-13) and Myles Turner (24 points, 10-for-14), but couldn’t overcome the Mavericks’ balanced attack led by Harrison Barnes’ 21 points.

James Harden led all scorers with 26 points while Luc Mbah a Moute scored 17 points on a perfect 7-for-7 shooting night off the bench to give the Rockets their 13th straight win.

You know Donovan Mitchell for his dunks, but the rook has a handle on him, too 👀

Andrew Wiggins, Karl0-Anthony Towns and Jeff Teague combined for 68 points. Buddy Hield scored 16 off the bench for the Kings.