Dunks, buzzer-beaters, record-setting performances. Every single team in the NBA played in an action-packed Friday. 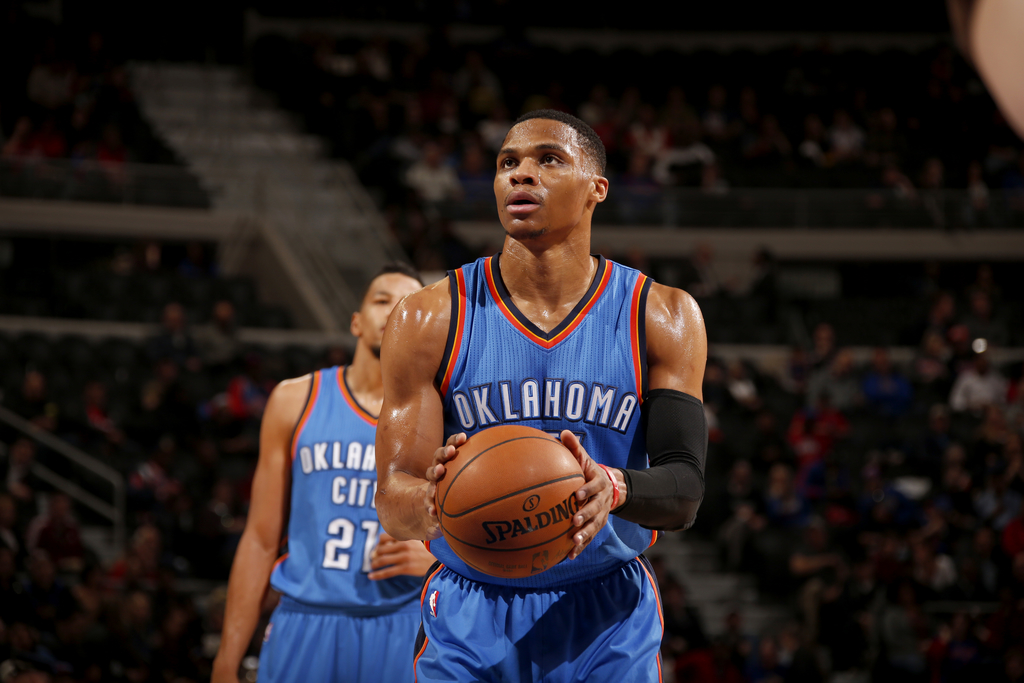 It took the Spurs a little bit of time to wake up for this early game in Boston. The Cs led by 14 in the first quarter thanks to a slow start from the Spurs’ starters. David Lee then led a big charge from San Antonio’s bench. The second unit finished with 56 points, including 15 points and 12 rebounds from Lee. With 19 from Patty Mills and a career-high 15 from rookie Davis Bertans, they outscored the Spurs starters.

The Celtics won the assist battle and had fewer turnovers than the Spurs, but they shot only 9 free-throws, compared to 25 from the silver & black. Isaiah Thomas had 24 and 8 for Boston, Jae Crowder chipped in 18 and Avery Bradley got 19 points and 8 rebounds.

John Wall jumped on the Magic early, helping the Wizards build a 26-7 lead. He had 5 dimes and 3 steals midway through the first. But Orlando slowly climbed back into the game by keeping the Wizards out of the lane after that big first quarter. Washington had just 10 free-throw attempts.

In the end, Wall proved too much for Orlando. He scored the final 8 points for the Wizards. The Magic had 19 turnovers and 18 assists. Serge Ibaka had 19 points and 4 blocks and Nik Vucevic had 17 points and 17 rebounds. Wall led the ‘Zards with 26 points and 10 helpers. All five starters scored in double-figures for Washington. Bradley Beal had a season-high 8 assists.

The Cavs are on fire. A game after scoring 40, Kevin Love led Cleveland with 27 points and 10 rebounds. He was backed up by 25 from Kyrie Irving and 19 points and 11 assists from LeBron James. The wine & gold led by as many as 45, limiting Dallas to 8-35 from downtown and 8-12 from the foul line. The Cavs made 20 threes and every player on their roster scored. Dirk Nowitzki had 15 for Dallas.

There were 22 lead changes and 17 ties in this one. The Knicks led early, then the Hornets took control between the second and third quarters. During the fourth, they traded body blows, eventually needing overtime to decide a winner.

Carmelo Anthony stepped up for New York, registering a season-high 35, making the game-winner with 3 seconds remaining. The Knicks have now won six in a row at the Garden and three straight overall. The Hornets get a shot at revenge when they host the Knicks on Saturday night.

The Bulls ended their six-game road trip with a 4-2 record, capping off two weeks on the road with a wire-to-wire win against Philly. Dwyane Wade and Jimmy Butler both had 26. Rajon Rondo had team-highs in assists and rebounds, with 10 and 8, respectively. Without Joel Embiid (rest), the Bulls built the lead up to 28, giving their starters some much needed rest towards the end of this game.

The Clippers suffered just their third loss of the season because of a balanced team effort from Detroit. The Pistons grinded their way to this win with 17 from Marcus Morris, 16 from Andre Drummond, Ish Smith and Kentavious Caldwell-Pope, 15 from Tobias Harris and 11 from Jon Leuer. They simply outplayed LA, earning this win with pure determination. The Pistons had more rebounds, three-pointers and steals, and fewer turnovers than the Clippers.

LA grabbed an 82-80 lead thanks to a JJ Redick barrage late in the third. But there was no way Detroit was losing this game, overcoming 24 from both Redick and Griffin, and a season-best 15 assists from Chris Paul.

The Hawks hadn’t scored fewer than 92 points all season. But Utah put the clamps on them. Atlanta also had season-lows in assists and field goals, getting only 11 dimes and 26 buckets. Dennis Schroder scored 16 for the Hawks, but needed 19 shots to do it.

Utah had their best defensive performance of the season, which is saying a lot. The Jazz currently have the second-best Defensive Rating in the League, trailing only the Hawks. The Jazz had 55 total rebounds, 9 blocks and 9 steals. It marked the third time this year that they’ve gotten at least 50 rebounds. They’ve won all three of those games.

Rudy Gobert had 5 rejections and Shelvin Mack had 4 takeaways. Gordon Hayward led the Jazz in scoring with 24, while George Hill had 23.

Gordie with the swat! https://t.co/SzeFZsWigd

Somebody gotta stop DeMar DeRozan and Kyle Lowry in the clutch. DeRozan hit a downhill midrange jumpers with two defenders in his face, Lowry drilled a 27-footer with 1:06 left, then he got a steal to put the dagger in Milwaukee. The duo combined for 45 points, 12 rebounds and 10 assists. They scored Toronto’s final 13 points.

Meanwhile, Giannis Antetokounmpo had 29 points, 11 assists and 6 rebounds on 12-17 shooting. But that monster performance will go unnoticed because of how lethal DeRozan and Lowry were. DeRozan led Toronto in rebounding and Lowry led them in assists.

The Grizzlies inexplicably brought Mike Conley off the bench tonight in their loss to the Heat, citing minutes-management as the reason. Conley still led the team in scoring, but didn’t get any help. JaMychal Green was the only other member of the Grizz to score in double-figures. Without Zach Randolph (indefinite leave of absence to mourn the passing of his mother), Memphis didn’t have the firepower.

Tyler Johnson had 22 for Miami. Four other Heat players scored at least 10 points and Miami led for the whole game.

The Pacers are dealing with some major injury problems at the moment. Paul George sat out yet another game, and will miss the next three because of injuries to his left ankle and back. CJ Miles’ return is uncertain and Kevin Seraphin will also miss at least the next three games to rehab his sore knee. With three rotation players out, the Pacers used their depth to rout the Nets.

Glenn Robinson III made the most out of his second appearance in the starting lineup, dropping 20 points. Al Jefferson and Rodney Stuckey combined for 34 of Indiana’s 48 bench points. Myles Turner, Monta Ellis and Thad Young all scored at least 11 points.

After a close first quarter, the Pacers blew the game open and were up by as many as 31. Jeremy Lin hasn’t played since November 2 and his absence has really made a difference for the Nets, who have now lost six in a row.

Russell Westbrook put up yet another triple-double tonight, going for 36 points, 12 rebounds and an NBA season-high 18 assists. It’s his sixth of the season and 43rd of his career. He’s now sitting with season averages of 32 points, 10.9 assists and 9.8 rebounds. Yeah.

OKC had trouble putting the Nuggets away. Behind Wilson Chandler’s 32 points and a no-fear performance from 19-year-old Jamal Murray (20 points), Denver was able to keep Westbrook under wraps for three quarters. Even when Russ scored 24 points in the fourth and OT, the Nuggets were still right there, narrowly missing out on this win.

Zach LaVine had one of the best dunks of the season and the young Timberwolves were able to outlast the Suns for an impressive road victory, just their second win away from Target Center this season. Andrew Wiggins broke out of his three-game shooting slump to lead Minnesota with 25 points. Along with 22 from Karl-Anthony Towns, the Wolves pulled off a 23-point turnaround in the fourth quarter. The Wolves also got good minutes from Tyus Jones. The Suns committed a season-high 26 turnovers and scored only 10 points in the fourth.

This wasn’t an easy win for the Blazers. Anthony Davis and the Pelicans hung tough till late in the fourth, trailing 105-101. Then the Blazers responded with a quick 8-0 burst to seal the game. Davis went for 31 and 13. Jrue Holiday had 16 points off the bench. Langston Galloway and Terrence Jones helped New Orleans stick around, making timely buckets and key defensive stops.

Damian Lillard went off late in the third, pushing the Portland lead to 94-78. He finished with 27 points and 11 helpers. CJ McCollum had 24, Mason Plumlee had 12 points, 14 rebounds and 8 assists, Mo Harkless had 19 points and 11 boards. Portland outrebounded New Orleans 52-34.

No Nick Young, Julius Randle or D’Angelo Russell meant for trouble for the Lakers tonight. They played hard but Golden Sate’s on a roll. The Dubs last loss was on November 4, to the Lakers. They’ve seemingly figured out how to play together since then. Tonight, they had 31 assists on 43 field goals, getting 29 from Kevin Durant, 24 from Stephen Curry and 18 from Klay Thompson. That trio combined for 8 of GSW’s 11 triples on the night. Durant also chipped in a season-high 9 assists and 6 rebounds.

Jordan Clarkson had 20 for the Lakers. Luke Walton got great minutes of out Tariq Black and Thomas Robinson. They combined for just 14 points and 15 rebounds, but they infused LA with much needed energy and a willingness to compete.

The Rockets set a single-game NBA record with their 50 attempted three-pointers tonight. They made 21, paced by Trevor Ariza, who hit 6-11. Of the 10 Rockets that played, only Nene, Clint Capela and Montrezl Harrell didn’t make or attempt a three-ball. Everyone else hit at least one.

James Harden picked up his fourth triple-double of the season, getting 23, 10 and 10. He was one of seven Rockets to score in double-figures. Houston had 27 dimes on 40 baskets.

They held Sacramento to 9-32 shooting from outside. And though DeMarcus Cousins had 32, no other King had more than 12. Cousins made a career-best 5 three-pointers, but that couldn’t overcome the Rockets’ lead of as many as 29.