Post Up: Giannis Antetokoumpo Posts Triple-Double in W Against Kings 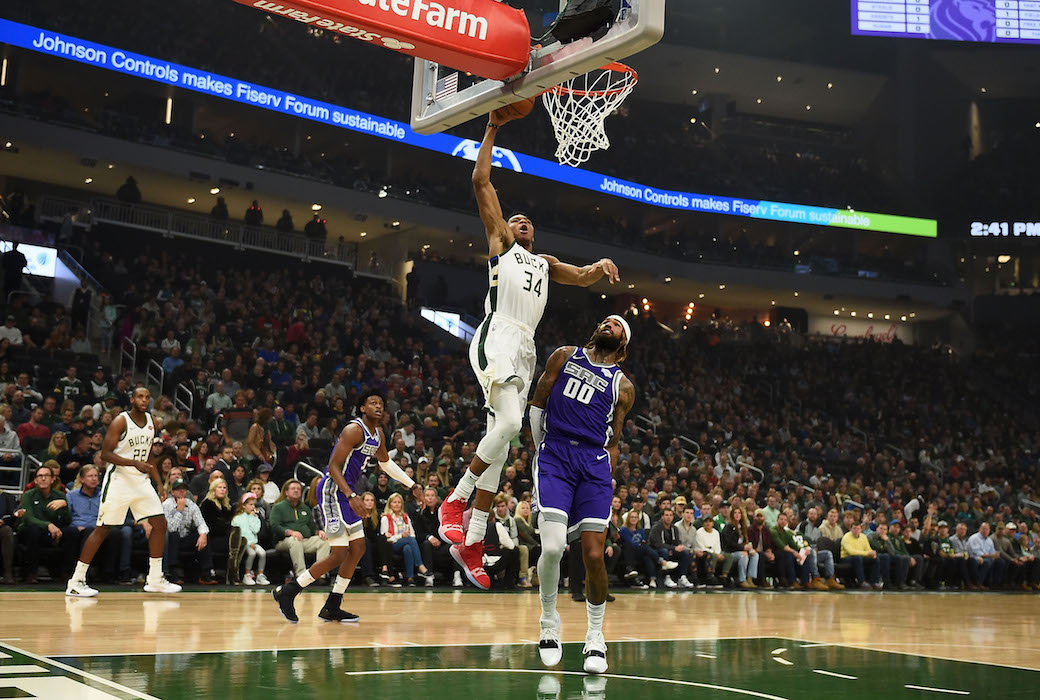 After Saturday’s afternoon win in Detroit, the Sixers came up short Sunday in Brooklyn. Despite Ben Simmons (20 points, 12 rebounds) and Joel Embiid (16 points, 15 rebounds) posting double-doubles, D’Angelo Russell led all scorers with 21 points. Caris LeVert had 18 first-half points and Rondae Hollis-Jefferson chipped in 21 points off the bench, including this left-handed baseline dunk that had no one on the Sixers squad wanting to contest it.

No one was trying to jump with Rondae. (via @BrooklynNets) pic.twitter.com/dgPQdQhKqp

John Wall and Bradley Beal combined for 48 points as the Wiz ended a five-game losing streak. Dwight Howard, who returned to action Friday night, had 10 points in 31 minutes. Enes Kanter was the Knicks’ leading scorer with 18 points.

Devin Booker took matters into his own hand down the stretch, sinking a 17-foot jumper with 1.7 seconds on the clock in Phoenix. Booker also scored 14 of his 25 points in the fourth quarter and finished with seven dimes. Trevor Ariza chipped in 16 points.

Aside from getting bodied by rookie Josh Okogie, Jusuf Nurkic finished with 19 points and 12 rebounds 24 hours after Portland lost to the Lakers at home. Nurk wasn’t the only Blazer to post a double-double as Meyers Leonard (15 points, 12 rebounds) finished with one of his own. Damian Lillard finished with 18 points and C.J. McCollum contributed 16, respectively. Karl-Anthony Towns had 23 points, his fourth game with 20 or more points. Derrick Rose, who scored a career-high 50 points earlier this week, earned a DNP-CD, and Jimmy Butler sat out during Sunday’s game.

There’s always a player that tends to go off against the Lakers and Sunday’s game at STAPLES Center was no different. With no Kawhi Leonard (foot soreness), Serge Ibaka finished with a career-high 34 points (hitting his first 14 shots) as the Raptors had a 31-point lead in the first quarter. Kyle Lowry had 21 points and 15 assists. The Lakers never seemed to get in an offensive groove and their defense was horrendous. Kyle Kuzma was the team’s leading scorer with 24 points and LeBron James scored 18 points.

Serge Ibaka goes 15-17 from the field en route to a career-high 34 PTS in the @Raptors 9th win of the season! #WeTheNorth pic.twitter.com/VNPRIIzfeX

The Greek Freak messed around and had a triple-double (26 points, 15 rebounds, 11 assists) in a rout against the Kings. Aside from his stellar stat line, Giannis put Kosta Koufos on a poster in the second half. A total of eight Bucks players finished in double figures. Kings forward Justin Jackson had 22 points in 25 minutes off the bench.

ANOTHER GIANNIS POSTER. How do you stop this man??? (via @Bucks) pic.twitter.com/CsccZvGIzH