After a slow start, LeBron, AD and the Lake Show took care of business in a close one against the rolling Heat. 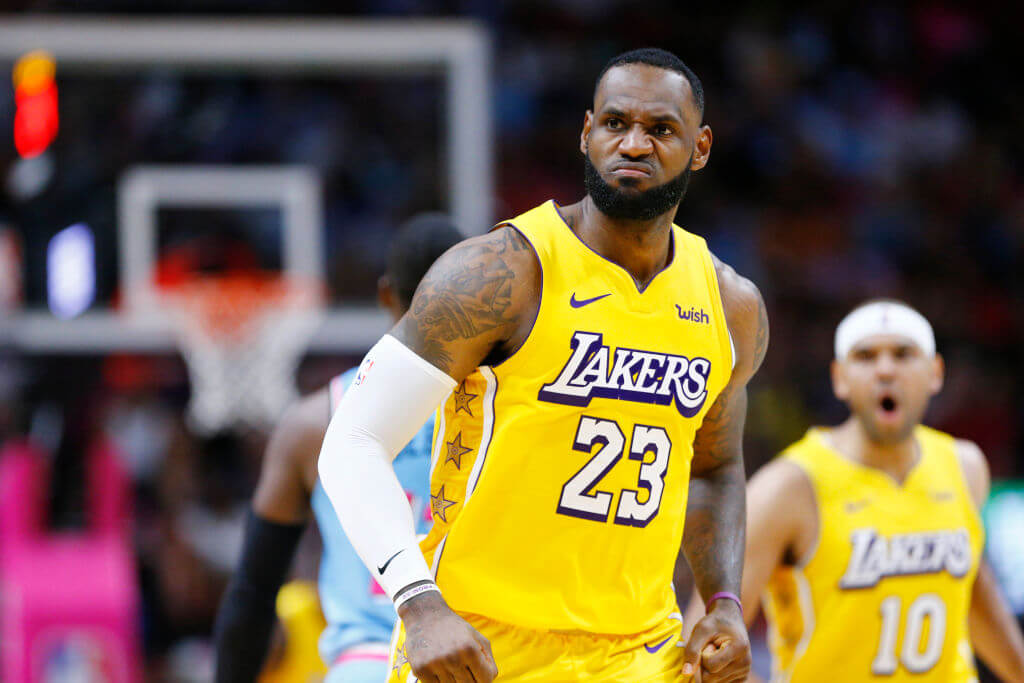 Stop us if you’ve heard this before, but James Harden is ridiculous.

After a hard-fought win in Boston, the 76ers turned around to take care of business against the slumping Pelicans. Tobias Harris was phenomenal with 31 points and 5 boards on efficient shooting. Joel Embiid put up 24 points, 11 rebounds and 5 assists, and Ben Simmons bounced back for a stat-stuffing with 24 points, 11 assists, 2 steals and 3 blocks.

For the Pelicans, they can at least bask in JJ Redick’s warm reception back in Philly, and Brandon Ingram’s continued scoring dominance.

This was a barnburner.

The Lakers snapped Miami’s previously 11-0 home record to start the season, even amidst an uncharacteristically tough start to the game for LeBron, who had 7 turnovers in the first half. But the Lake Show pulled it together. Bron still got his, with 28 points, 9 rebounds and 12 assists, while Anthony Davis dropped 33 points, 10 rebounds and 3 blocks. Also, shoutout JaVale McGee, who had five monster blocks on the game, many of which were stuffing Bam Adebayo (no slouch himself!) at the rim.

The Pacers are one of the most well-rounded teams in the league; and they don’t even have Victor Oladipo back.

All five starters hit double digit points again, with Malcolm Brogdon leading the way with 19 points, 8 rebounds and 12 assists. The Hawks have been, to put it mildly, awful. Trae Young had a rare rough game, going 9-30 from the field, DeAndre Hunter chipped in 21 points and Jabari Parker had 20, but overall, just another bad loss for a Hawks team that could use reinforcements.

It’s legitimately shocking to see such a low scoring game. Nowadays, this is commonly the score at the end of 3 quarters.

Every Hornets starter scored in double digits, while no Bulls player scored more than 12 points. Honestly, the less we discuss this game the better.

At least we were offered this awesome Lauri Markkanen slam:

The Bucks could be on an all-time run if they keep this up. They have not lost since Nov. 8 and have now won S-E-V-E-N-T-E-E-N games in a row. And Giannis is barely playing! He dropped 37 points and 11 rebounds in only 27 damn minutes.

But this is not a one man team. The Bucks are deep, and full of capable players who can comfortably play multiple positions and knock down 3-pointers. Right now, they’re the clear favorite to represent the East in the Finals.

On the bright side, the Grizzlies finally got that breakout Jaren Jackson game. Jackson, who has been mired in consistent foul trouble virtually all season, blew up for 43 points on 9-15 from 3-point range. He is dripping with potential and brief glimpses of production, but my man has got to stay on the court.

This game was probably closer than it should have been considering the Warriors’ depleted state, but ultimately, the Jazz got the W, and sometimes that’s all that matters.

Bojan Bogdanovic stayed hot from deep, converting 8 of his 13 attempts for 32 points, while Donovan Mitchell had 28 points, and Gobert added a solid 15 points, 15 rebounds and 2 blocks. The Jazz are not perfect and Mike Conley has struggled to fit in, but they usually flip the switch as the season progresses. Also, check out this wicked move by Mitchell for the slam:

Despite a roaring and inspired Timberwolves comeback from 27 points, the Clippers put them away when the going got tough. Missing Lou Williams, Patrick Beverley, Landry Shamet and JaMychal Green, the dynamic duo of PG and The Klaw took it upon themselves to wreck absolute havoc. Kawhi scored 42 on 19-19 from the free throw line, while George dropped a monstrous 46, making them the first Clippers duo to ever score 40 points each.

The game was a blowout, until it was not, and that was mostly thanks to the grit of Karl Towns (39 points, 12 rebounds) and Andrew Wiggins (34 points) putting the team on their back. There are no moral victories in professional sports, but the Wolves’ refusal to give up should be commended.

The Kings fought their way into the playoff chase after a brutal 0-5 start to the season, but losing to the Knicks will not keep them there for long. Buddy Hield was a flamethrower from deep, draining 6 3’s en route to 34 points and 12 rebounds. A minor silver lining: Marvin Bagley has worked his way back from a thumb surgery and is quietly putting up numbers in limited minutes.