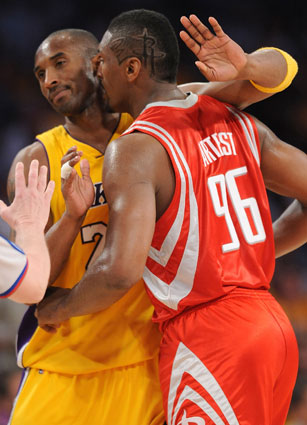 Okay. I’m home. In Nova Scotia. It is 2:13 am and we’ve got half of a fourth quarter to play, five technicals, D. Fish tossed out, Ron Artest tossed out, Von Wafer tossed out (courtesy of Coach Adelman), Kobe’s elbow connecting with Ron’s neck. Technicals for Luis Scola, Lamar Odom, Luke Walton and Kobe Bryant.

This game is insane.

NBA Playoffs is where crazy happens.

I’m beyond making sense right now and yet I cannot imagine sleeping because this game was so damn nuts. Wasn’t planning on writing today, but needed to because we need to discuss. Everything. Anything. All of it.

I missed the C’s and Magic because I was on the plane and we didn’t have the game on the channels I had access to. I’m still not believing this night. Game 3 is going to be psycho and perhaps we could have some players missing?

I hope Ron is good and the media doesn’t go to crazy on him, assuming he’s going to go crazy. He took an elbow to the throat and overreacted a bit. Let’s leave him be.

Brian Cook on the STAPLES Center court in the final seconds of a loss for the Rockets made me feel badly for him.

Everyone is talking about the Nuggets/Mavericks series and how Denver is going to out-tough Dallas. How Kenyon’s foul against Dirk (and the fine), affected Game 1, etc., etc. This series just took over as the most intense one going. Wow. And, now we go into Houston tied.

This thing is over. Tied 1-1. I knew about 20 people at this game and I’m beyond jealous of each and every one of them.

So, who gets suspended for Game 3? Rafer? Kobe? Ron? House? Fish?

And most importantly, will Adelman allow Von Wafer to step foot into the Toyota Center?

Okay, perhaps even more importantly, Boston and LA have each tied things at 1 game apiece.

I love this game.