Eric Bledsoe and Russell Westbrook battled it out in an overtime thriller on Thursday. 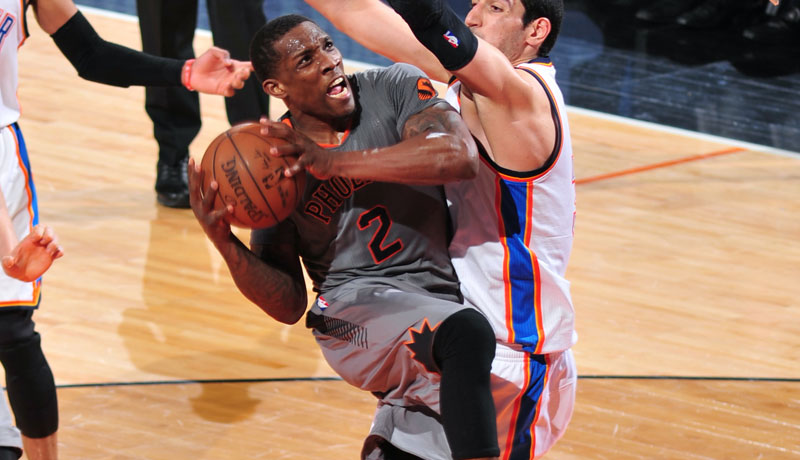 LeBron James looked like a man amongst boys Thursday night in a potential finals matchup. He dropped a season-high 42 points and pulled down 11 boards in a convincing win over Golden State. James outplayed both Splash Brothers combined — Steph and Klay totaled 31 points and 10 rebounds.

Kyrie Irving scored 24 points but injured his left shoulder. He didn’t make the trip to Indiana for Friday’s matchup with the Pacers. Kevin Love posted 16 and 8, and Tristan Thompson outworked the opposition en route to 12 and 8. David Lee scored 19, and Draymond Green finished with 16 points, 8 rebounds, 4 assists and 5 steals in the losing effort.

The performance won’t instantly propel the King in front of Steph in terms of MVP rankings, but it’s definitely a good look.

The explosive guard was a terror — especially in the second half and overtime. Russ now leads the league with 4 triple-doubles on the season. He brought his team back from down 14 to send the game to overtime. However, he couldn’t finish a reverse layup with 5.7 seconds left in the extra period that would’ve tied the game.

This was one of the best PG battles we’ve seen all season. Eric Bledsoe was nearly as impressive as Westbrook; he went for 28 points, 13 boards and 9 assists. And more importantly, his team came out on top. Markieff Morris added 29 points and 11 rebounds, Alex Len contributed 12 and 11 and Brandon Knight dropped a cool 15.