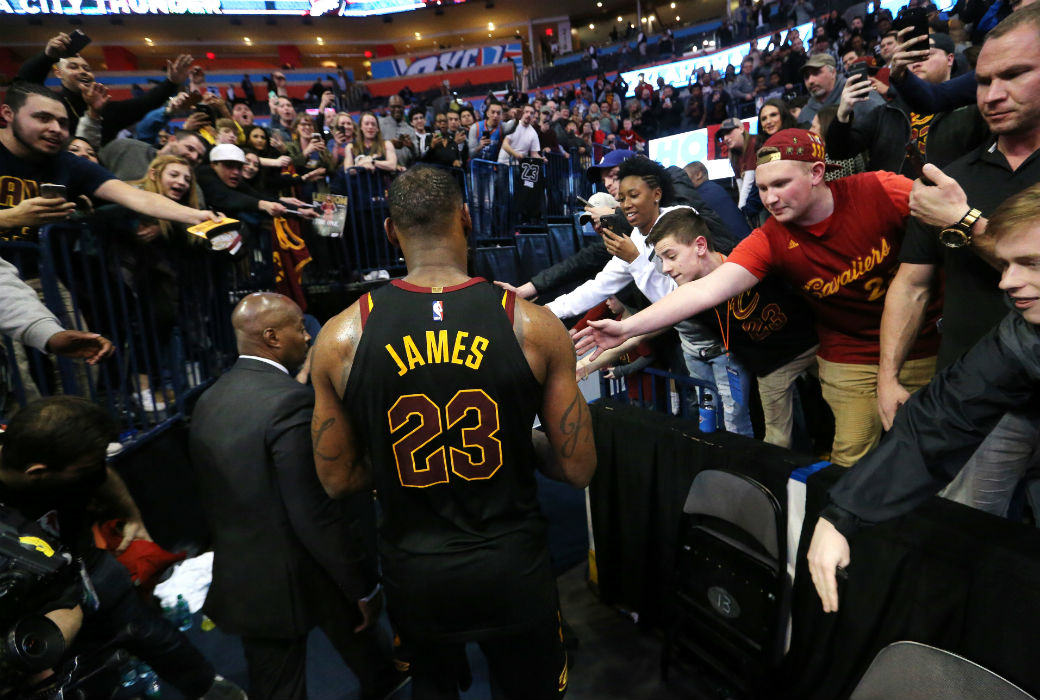 The Raps just keep rolling at home. They used a monster third quarter to overcome a slow start and build a lead that would hold, albeit barely, for the rest of the night.

Kyle Lowry breaking out the HORSE buzzer-beater 😂😂 (via @TheRenderNBA) pic.twitter.com/a7yXiGL4Te

Toronto led by 17 at the end of three and looked poised to run away with this one, but the Heat didn’t go away. Miami used a furious 16-2 run to make this one a game and cut the deficit to 114-112 with under seven seconds to go on a Wayne Ellington three. After C.J. Miles split a pair of free throws, the Heat had a chance to send this one to overtime but Josh Richardson‘s heave hit off the back rim.

DeMar DeRozan and Kyle Lowry combined to score 49 points to pace the Raptors while Goran Dragic (28 points) and the Miami bench (52 points) led the way for the Heat.

The revamped Cavs have only played two games with each other but, so far, they’re making GM Koby Altman look like a genius. Cleveland was in control basically from start to finish and got contributions from the whole roster. LeBron (37 points, 8 rebounds, 8 assists) did LeBron things but it was the play of JR Smith (18 points on 6-of-9 shooting from three) and some of the new pickups that allowed Cleveland to hold off the Thunder.

Jordan Clarkson hit him with the 2K step-back. (via @NBAonTNT) pic.twitter.com/x9pPtYEaSA

There’s no doubt this Cavs team is more dedicated on the defensive end than the pre-deadline Cavs were, and also just seems to be having more fun. It also helps that they got a lot younger and much more athletic. Oklahoma City got 21+ points from each of the Core Four of Russ (also had 12 assists), PG, Melo and Steven Adams (had 17 rebounds) but only had 20 points from the rest of the roster.

It wasn’t the most impressive W for the Bucks, who almost blew a 13-point fourth quarter lead, but it kept Milwaukee’s strong play under interim head coach Joe Prunty going. The Bucks have won nine of their last 11 games, with the hot stretch starting the day Jason Kidd was fired.

Bari with the double poster! 😮 (photo via Getty Images) pic.twitter.com/heA0Y8QVsd

Giannis Antetokounmpo (15 points, 15 rebounds) and Khris Middleton (21 points, 7 rebounds) provided most of the scoring, with recent acquisition Tyler Zeller adding 14 points and 8 rebounds off the bench. Atlanta shot just 38 percent from the field.

When James Harden scores 34 points, dishes out 13 assists and commits only one turnover, the Rockets are almost unstoppable. The Timberwolves experienced that firsthand. Houston popped 22 threes on just 47 attempts, with both Harden and Ryan Anderson hitting 6 triples apiece. Also, as Rockets GM Daryl Morey noted, they made history.

The game tonight was a great reminder how special this group is. A different player steps up every night. The 10 three-pointers made in the 4th quarter are an NBA record.

Minnesota, of all teams, is pretty well constructed to match up with the Rockets but even the Timberwolves couldn’t stop them tonight. The win moves Houston to within a half-game of the Warriors for the top spot in the West. Karl-Anthony Towns scored an efficient 35 points on 12-of-16 shooting (with 12 rebounds) to lead the way for the home team.

In a lost season for the Kings, Zach Randolph has been a bright spot. The veteran forward has expanded his range significantly and keeps getting buckets as one of the elder statesman on such a young Sacramento team. His 22 points (in 26 minutes) helped the Kings build an insurmountable halftime lead. Standout rookie Bogdan Bogdanovic helped out with 19. Sacramento had a season-high 30 assists on 47 field goals.

Six Mavericks scored in double figures with J.J. Barea (19 points, 13 assists) the high man. Dwight Powell — who has seen his role increase as of late — scored 18 points for his fifth 17+ point performance in his last six games.

The Spurs fell victim to the dreaded “second half of a back-to-back in Denver” and just ran out of gas in the fourth quarter after playing well for 36 minutes. With LaMarcus Aldridge out until after the All-Star break and Manu Ginobili leaving the game early with a sore right foot, San Antonio just didn’t have many healthy bodies left by the end of this one.

Denver’s starting to pull away… (via @NBAonTNT) pic.twitter.com/1oLVVfIDYn

Tony Parker (17 points) and Joffrey Lauvergne (26 points on 12-of-15 shooting with 12 rebounds) were the only two Spurs who were good from start to finish on Tuesday night, and it wasn’t enough. Another triple-double for Nikola Jokic (of the 23-13-11 variety) and 20 points from Will Barton helped put the Nuggets over the top and continue their dominance at Pepsi Center this season, with Denver improving to 23-7 at home.