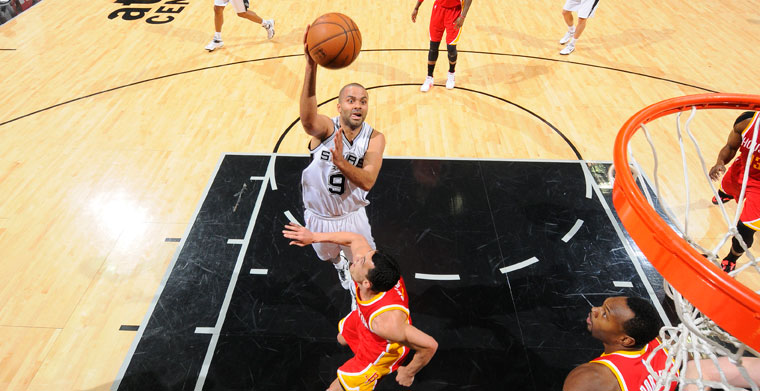 Marcin Gortat posted a tremendous statline with 18 points, 7 rebounds, 6 assists and 4 blocks. The Wiz Kids shot a franchise record 65.3 percent from the field. Robert Covington was the lone bright spot for the Sixers with 27 points. The rest of Philly’s starting five scored 2, 3, 5 and 6 points. Head coach Randy Wittman decided to rest John Wall, so the All-Star guard’s consecutive game streak ended at 208.

The first quarter of Raptors-Hornets was pretty ugly; the period ended with T. Dot ahead 20-15.

Toronto took off in the second 12-minute frame. The Raps had no trouble ending their seven-game losing streak against Charlotte thanks to the play of DeMar DeRozan (18 points, 7 assists, 3 blocks), Greivis Vasquez (16 points) and Lou “6 Man” Williams (16 points).

Kemba Walker dropped 15 points in a loss that likely ended any hope Charlotte had of making the postseason.

The youngest MVP ever returned to the floor played 19 minutes and scored 9 points on 3-9 shooting from the field. He looked pretty spry on one coast-to-coast finish.

Victory Oladipo (23 points, 5 rebounds, 5 assists, 3 steals) hit a layup with 1.5 seconds remaining to lift Orlando over the Bulls. Credit to James Borrego’s squad for coming back from down 15 in the first half to edge Chicago. Nikola Vucevic had 22 points and 7 rebounds. Elfrid Payton nearly triple doubled with 17 points, 9 dimes and 9 boards. The kid is a gamer. In case you haven’t seen the 21-year-old Louisiana native in action very much this season, just peep his ridiculous put-back below:

Isaiah Thomas exploded for 34 points on just 17 shots, and the Celtics eliminated the Pistons from playoff contention. Pretty amazing that this will be the first time Stan Van Gundy misses the postseason, huh?

Pero Antic and Thabo Sefolosha were arrested early Wednesday  morning and didn’t play. The Hawks were already short-handed without the injured Paul Millsap.

Luckily for the ATLiens, it didn’t matter in the end as they took care of Brooklyn despite blowing a big fourth-quarter lead. Al Horford (24 points, 7 rebounds, 2 steals), DeMarre Carroll (19 points, 9 boards), Jeff Teague (15 points, 12 assists, 4 steals) and Mike Scott (20 points, 8 rebounds) carried much of the load. Brook Lopez posted 26 points, 10 rebounds and 3 blocks as BK fell into an seventh place tie with Boston in the conference standings. The Celtics own the tiebreaker, so the Nets could end up matching up with the Hawks in the playoffs.

First of all, let’s all wish Chris Copeland a speedy recovery. He had surgery on his elbow and abdomen after a scary incident at a New York nightclub in the early AM on Wednesday.

As for the game, it was smooth sailing for Indiana against the Knicks last night behind George Hill’s 20 points, 6 rebounds and 3 steals. Langston Galloway put up 19 for the losing side. The Knicks shot just 34.5 percent from the field. The Pacers outrebounded NYK 54-34.

The Pelicans couldn’t buy a bucket a night after beating the league’s best team.

Memphis’ gruesome twosome of Zach Randolph (15 points, 13 rebounds, 2 steals) and Marc Gasol (15 points, 8 rebounds, 6 assists) abused NOLA’s frontcourt. The Grizz completely dominated. The Pels are now tied with OKC for eighth in the West. They shot just 35 percent from the field and 28.6 percent from 3-point range in their worst loss of the season.

LeBron James posted 21 points, 9 rebounds, 8 assists and myriad of dunks as the Cavs eked out a win over Milwaukee. Kyrie Irving added 27 points, 9 dimes and 3 steals and Kyrie Love rounded out the big three with 16 points and 11 boards. With the win, Cleveland clinched the division title and wrapped up the second seed in the East.

Tony Parker hit 13 of his 18 shots for 27 points, and Kawhi Leonard went for 20 points. He also snatched 4 steals and held James Harden to 6-15 shooting. Is Leonard making a late push for DPOY?

The Spurs have now won 9 straight games by 12+ points. Are they now the favorite to win it all? The aforementioned Harden dropped 22 points. Dwight Howard had 16 and 11.

Did Coach Pop and Harden compare beards? Yes, that happened:

How about this statline for the Manimal: Kenneth Faried had 29 points, 11 rebounds, 2 steals, 2 blocks in a matchup of two lottery-bound teams.

The Nuggets shot nearly 60 percent in the second half. Danilo Gallinari hit 3-4 from 3-point range and posted 27 points and 7 rebounds. Ty Lawson had 16 and 8.

Gary Harris lost his ankles in a tragic accident:

Utah has looked impressive over the second half of the season. In a win over Sac-town last night, Rodney Hood dropped 20 points and pulled down 8 rebounds. Derrick Favor had 18 and 11, and the Jazz came back from a halftime deficit to defeat the Kings.

Let’s see if Utah can carry over their recent success into 2015-16.

Newsflash, Suns: you probably don’t want to leave Dirk open in the final seconds of a close game.

Nowitzki (19 points) hit a dagger 3-ball with 22 seconds left to extend the Mavs’ lead to 106-102. Phoenix went on to miss three potential game-tying 3-pointers. Tyson Chandler scored 12 points and grabbed 23 rebounds, and Monta Ellis dropped 20. With the loss, the Suns are out of playoff contention. Meanwhile, Dallas locked up the seventh seed out West.

Richard Jefferson turned back the clock:

The Blazers are fighting for home-court advantage in the playoffs after capturing the Northwest Division title. They’re 1.5 games behind the Clippers and Spurs for fourth place.