Tim Duncan carried the Spurs in a series-tying Game 2 win on Wednesday. 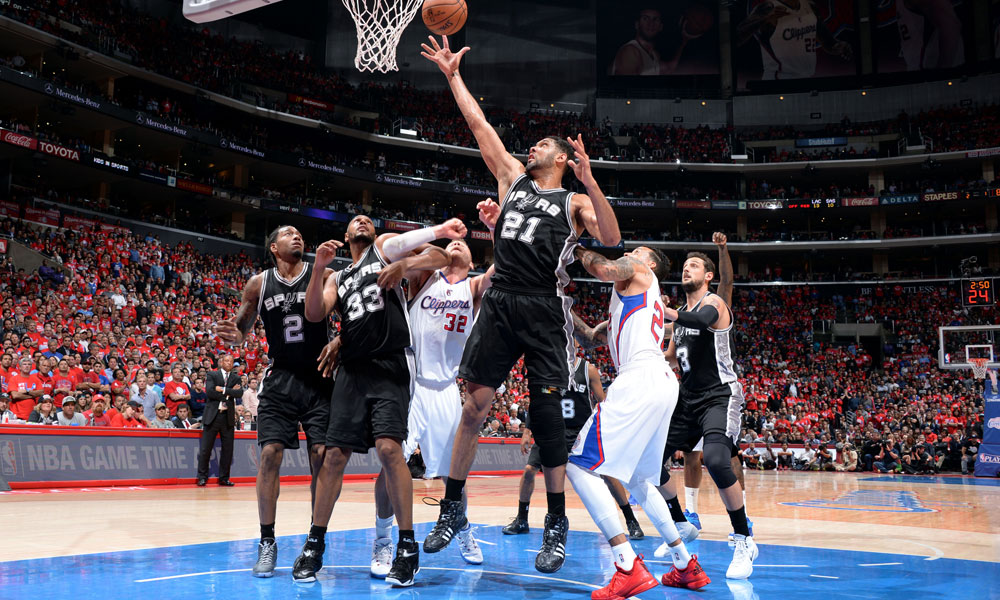 For nearly 48 minutes last night, the Hawks and Nets went back and forth: Atlanta would create some separation, and the Nets would, improbably, answer.

Brooklyn fell behind 86-75 with 6:30 left, but six minutes later had forced a two-point game and a chance to respond once again. Deron Williams had an excellent look at game-tying jumper in the waning seconds, but the shot rimmed out. Kyle Korver then iced the game at the line.

The Hawks now lead the series 2-0, but both wins have been closer (and more entertaining) than expected. It’s a little surprising to see Atlanta play only a notch or two better than the Nets, especially while at home. Still, the formula for success has remained intact:
Paul Millsap led the Hawks in scoring last night with 19 on 7/11 shooting. Korver finished 3/7 from deep (and 4/5 from the line). Al Horford double-doubled and handed out 7 assists. Jeff Teague went for 16 and 6. DeMarre Carroll, scoreless for the game’s first 47 minutes, converted a crucial layup in crunch time. Dennis Schroder added 13 off the bench.

The Hawks’ consistency is just amazing. In each of the first two games, four of five starters have scored in double-figures (Schroder making for a fifth) and the team has stalled for two and a half quarters before really waking up. They’ve both been steady games decided late, and the Hawks have been sharpest when it’s counted.

Meanwhile, the Nets look pretty decent themselves. After a competitive Game 1, they inched a little closer to an upset win in Game 2. Brook Lopez was awesome, hitting 8/15 shots for 20 points to go with 7 rebounds and 3 blocks. Lopez was a force over seven postseason games in 2013 and looks strong so far in his second career Playoff appearance.

Joe Johnson played a nice game as well, scoring 19 points with 9 rebounds. He was hot early on and sank a much-needed three in the closing minutes. Jarrett Jack came off the bench to add 23 points. He caught fire in the second quarter and followed Johnson’s clutch three with one of his own. Williams struggled with his shot all night (1/7), but did manage 10 rebounds and 8 assists. (Mirza Teletovic played 4 minutes in his first game back following a three-month recovery from blood clots in his lungs.)

The Nets really could have swiped a road game here—certainly Williams’ miss has to sting pretty bad. But they’ve managed to play the No. 1 seed close twice on the road, and they get the next two at their place. Game 3 is on Saturday afternoon.

The Portland Trail Blazers can talk all they want about not losing to Spanish players, but fact is, they dropped their second in this series and sixth in a row this season to Spaniard Marc Gasol (15 points, 7 rebounds, 5 assists, 3 blocks) and his Memphis Grizzlies last night. Lighthearted comment on a sign or not, numbers don’t lie.

And right now, the most important numbers are 2-0. For the first time in franchise history, the Memphis Grizzlies started off a Playoffs series 2-0.

In last night’s opening quarter, the Blazers looked like they came out to play some ball. LaMarcus Aldridge scored 9 points on 4-5 shooting, and his team led 21-19 after the first 12 minutes of the game. In the second, Memphis turned the tables, going on a 20-6 run to take a 50-39 lead by halftime. LA had a 13-point, 10-board double-double by the break (which grew into a 24-point, 14-board statline in the box score), but the Grizz weren’t having any of that.

The home team controlled their turnovers, only letting 5 slip compared to their opponent’s 13. In addition to Gasol’s numbers mentioned up top, Zach Randolph finished with a modest 10-point, 10-rebound double-double, Mike Conley and Courtney Lee contributed 18 points each, and Beno Udrih added 10 off the bench—including this bucket:

Memphis put away Portland for good with help from clutch shots from Vince Carter and Jeff Green, plus a pretty right-handed layup from left-hander Conley that gave the Grizz a 15-point lead in the final period. Fan-appointed “Secretary of De-Fense” Tony Allen heard some chants of his name too as some icing on top of an already sweet cake.

So Portland, that Spanish player and all his buddies are looking mighty fine. You gonna rip ‘em in Rip City come Saturday night, or nah?

To those of you crawling to work on the East Coast right now after staying up ’till 2 A.M. to watch the Clippers and Spurs last night: No you weren’t hallucinating after your third cup of coffee, this really was the wildest game of the Playoffs thus far. A game that featured nine lead changes, Joey Crawford T’ing up both coaches, a monster performance from Blake Griffin and a Godzilla performance from Tim Duncan proved that (to the surprise of no one) this is the best series of the playoffs thus far.

It’s almost criminal that one of these two teams has to go home after this series. Game 2 was a heavyweight fight, and the Spurs barely had enough to outlast a Clippers team that just ran out of energy in OT.

With Manu Ginobili (9 points, 3 assists, 2 rebounds) stuck in foul trouble and Tony Parker (1 point, 5 asissts, 2 rebounds) sidelined for much of the game with an Achilles injury after dropping only a single point, Tim Duncan picked up the slack. Duncan had a monster game, attacking DeAndre Jordan all night and scoring 28 points, with 11 rebounds and 4 assists. Kawhi Leonard also picked up the slack, scoring 23 points with 9 assists and 3 rebounds. He also did this to J.J. Redick.

But despite Duncan’s big game, the Clippers still had an opportunity to win the game late in the 4th quarter. Thanks to a late rally that saw the Clippers cut the Spurs’ lead from 10 to take the lead, the Clippers lead 94-92 with 14 seconds left in the game and 9 seconds left on the shot clock. But while the Clippers tried to whittle the clock down to the end, Blake Griffin lost his handle and the ball fell into the hands of Boris Diaw, who shuffled it ahead to Patty Mills, who was fouled with 4 seconds left. He hit both free throws, and sent the game into OT.

The Clippers got huge performances from Blake Griffin (29 points, 11 assists, 10 rebounds) and DeAndre Jordan (20 points, 15 rebounds). Yet Jordan shot only 6-17, and San Antonio repeatedly fouled his down the stretch to prevent the ball from going to CP3 or Blake Griffin. His terrible free throw shooting had Staples Center going crazy whenever he actually made one, but 6-17 isn’t going to cut it against a team as sharp as San Antonio. The Clippers now travel to San Antonio with the series tied 1-1, with little momentum, no rest, and a late game collapse under their belt. Get your coffee ready, because this series is going to get even crazier as it shifts to San Antonio.