Top Class of 2016 prospects hoop on Saturday in Long Beach (CA) one last time before heading off to college. 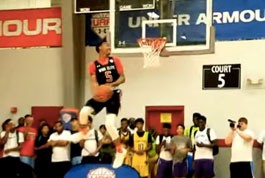 On Saturday, April 30, 2016, some of the top prospects in the Class of 2016 will converge in Long Beach (CA) for what will amount to most as the final all-star game of their high school careers. Some of the top prospects slated to compete include Arizona commits Terrance Ferguson and Rawle Alkins, Michigan State commits Miles Bridges and Cassius Winston, and UCLA commits Lonzo Ball and TJ Leaf, among many others. For the complete roster, visit ballislifeallamerican.com. Check out a preview of what some of the players slated to participate can do on the hardwood in the video above. The 2016 Ballislife All-American Game is set for tomorrow (Saturday) at 6:30pm PST. The 3-point and slam-dunk contest will kick off at 4:30pm PST. Both will be streamed on YouTube.