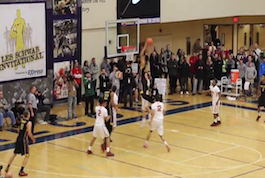 Scouting reports should really begin emphasizing that Ben Simmons, the top ranked forward in the class of 2015, can finish alley-oops to himself off the backboard pretty easily. After all, he’s done it twice just this month. After doing so just a couple of weeks ago at the City of Palms tourney in Florida, defenders at the Les Schwab Invitational in Oregon were also caught looking. The top ranked senior forward has drawn comparisons to a young Tracy McGrady, and at the every least these recent off-the-backboard jams do show some resemblance.