George Hill With the Game Winner vs Charlotte Hornets (VIDEO) 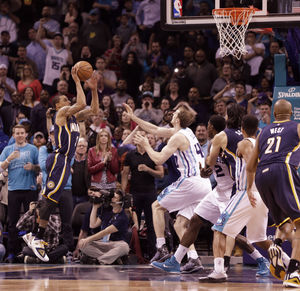 The Charlotte Hornets blew a 21-point lead against the visiting Indiana Pacers, and suffered a 103-102 loss on George Hill’s baseline floater Sunday.

Hornets head coach Steve Clifford took the blame for the loss, saying that his squad was “terribly coached.”

“We just played as bad a basketball as we played all year,” Clifford bemoaned. “We were totally disorganized – random, awful basketball on both ends of the floor.”

Pacers point guard George Hill got Brian Roberts and Cody Zeller discombobulated in a pick-and-roll. Hill was able to drive baseline, seemingly for a kick-out to a jump shooter. […] Then suddenly Hill spun 180 degrees toward the basket to see … nothing but basket.

“I was pretty surprised,” Hill said. “This is money. That’s my shot.”