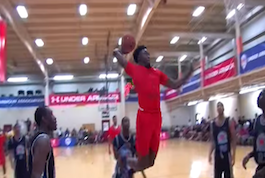 You likely won’t find another prospect who had as big of a summer as Jaylen Brown did. The wing out of the Peach State made a case for the top spot in the 2015 class after killing the AAU circuit. As you’ll see in the video above, he can do a little bit of everything and has drawn some comparisons to the versatile Stanley Johnson. The kid put in work during the summer and now some analysts have him projected as the top recruit in the senior class.