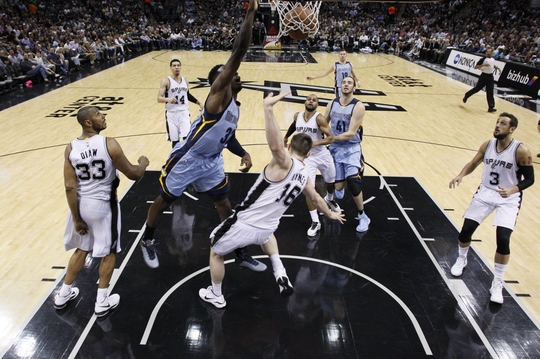 Poor Aron Baynes returned from a sprained ankle injury Sunday night, and played reasonably well in 18 minutes of burn (four points and seven rebounds.) All anyone will remember, though, is Jeff Green’s monster poster dunk.

Unfortunately for the visiting Memphis Grizzlies, that was their lone feel-good moment Sunday, as the San Antonio Spurs took care of business 103-89.

Kawhi Leonard exploded for 15 points in the fourth quarter, en route to a game-high 25.

With the postseason looming, the Spurs are starting to look terrifying all over again.

“We are not dumb,” guard Manu Ginobili said. “We were going to keep going to him.” […] By the time Leonard had finished his carnival gallery-style shooting flurry, scoring his team’s first 15 points of the fourth, the Spurs had all but put a headstone on the Grizzlies’ last-gasp rally.

With Leonard playing fourth-quarter assassin on his way to 25 points and 10 rebounds, the Spurs (47-26) polished off a dominating sweep of what was supposed to have been a challenging three-game homestand. […] How’s this for a measuring-stick week? Not only did the Spurs ring up victories over Oklahoma City, Dallas and Memphis by a combined 71 points, they did so while trailing for all of 93 seconds.

“I was getting the shots that I wanted,” said Leonard, who finished 11 of 17 and came within a point of his regular-season career high. “Guys were looking for me, and they fell.”