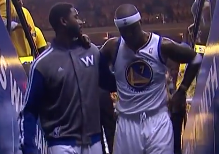 When O’Neal got into the locker room – where he was diagnosed with a sprained right knee – he saw the replay and realized he had been knocked to the floor on a bull-like charge from 290-pound Clippers forward Glen “Big Baby” Davis.

“I looked at it as just a dirty play,” he said.

“I’m not going to go try to dive into somebody’s legs,” O’Neal continued. “It wasn’t a scramble for the ball. I respect people’s ability to come out and perform and take care of their family, based on their bodies.

“Either he has terrible balance as a pro athlete, or that was a dirty play.”

O’Neal said that he and Davis will “have a conversation.” And if O’Neal has his way, their chat could come as soon as Saturday, when the teams meet for Game 7.

“Anything short of God coming back for the rapture or an ACL,” he said, “I’m going to play in Game 7.”