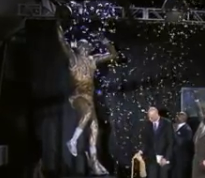 The Los Angeles Lakers paid tribute to Kareem Abdul-Jabbar by unveiling a statue that shows Cap taking one of his majestic hooks shots. Jabbar was very moved. Per the OC Register: Kareem Abdul-Jabbar’s famed skyhook, already immortalized in the minds of Lakers fans and opponents, has now been cast in bronze for future generations of basketball fans. The former Lakers great, helped by a few of his closest friends, unveiled 16-foot bronze likeness of the ‘Cap’ on Friday before the Lakers played Phoenix at Staples Center. ‘Lou Gehrig spoke about being the luckiest man in the world, and as a young person at that time I didn’t know what that meant,’ Abdul-Jabbar said. ‘But having lived my life and having had the wonderful experiences that I’ve had in basketball, I can understand now what a man like Lou Gehrig meant. I get it. When you’re fortunate enough to be honored in this way, it’s a very humbling experience.’ Abdul-Jabbar’s statue, created by sculptors Julie Rotblatt Amrany and Omri Amrany, depicts the former center with his signature goggles and No. 33 jersey, putting up a skyhook. It will join statues of Jerry West and Magic Johnson in Star Plaza.”