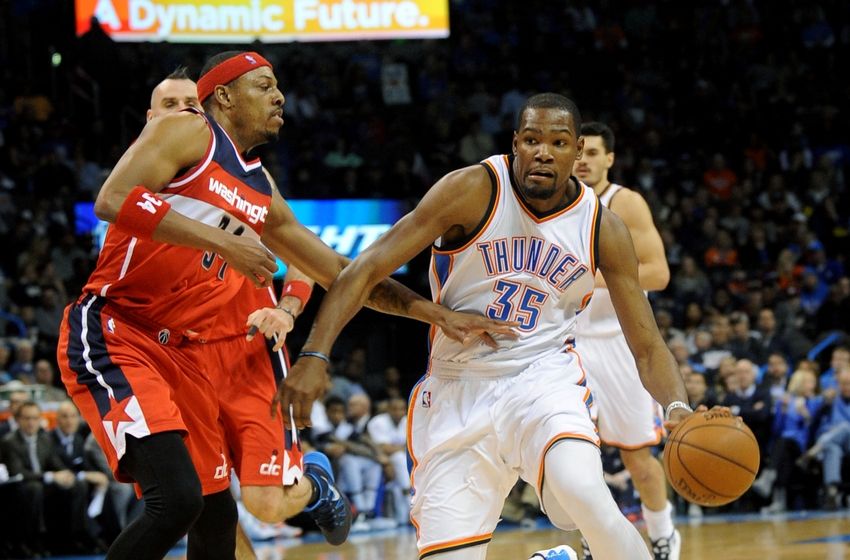 With the OKC Thunder in town Wednesday to play the Washington Wizards, Kevin Durant’s free agency in the summer of 2016 is once again top of mind for fans and media in DC.

Durant’s mother, Wanda Pratt, acknowledged that her MVP son “hears the talk” regarding his looming big decision, but that he’s focused on the here and now with the Thunder.

“One of the things that I know about Kevin is that he’s really focused on the season that he’s in,” Wanda Pratt, Durant’s mother, told NBC 4′s Jason Pugh this week. “He hears the talk. And we all hear it. But he doesn’t allow himself to be overly concerned with that, because the time is not now for … him to make that decision. So right now he’s just focused on this year. He [and Russell Westbrook] have been out injured, and so they’re having a difficult season right now. I think they’re just at .500. And so they’re focusing on trying to get to the playoffs now, so he’s not focusing on [free agency] right now.”

Still, the diehard #KD2DC folks won’t be dissuaded by Pratt’s interview. She talked lovingly about Washington, saying “This is home. I love the DMV. There’s no place like it.” And she said she likes the home team as well. […] “Well, I root for the Wizards when they’re not playing my son, of course,” she said. “I think the Wizards are doing great, but [Wednesday] they’re gonna have a difficult time playing my son and his teammates, how about that?”

Pugh asked Pratt if Durant would confide in her during his free-agent decision-making process. […] “Well in the past, I would probably encourage a discussion,” she said. “But now I’ll just wait for it. Hopefully he will talk to me. I’m quite sure that he will. … But I’ll just kind of sit back and wait.” […] “I want my son to be happy,” she said. “I want him to be in the best place for him.”