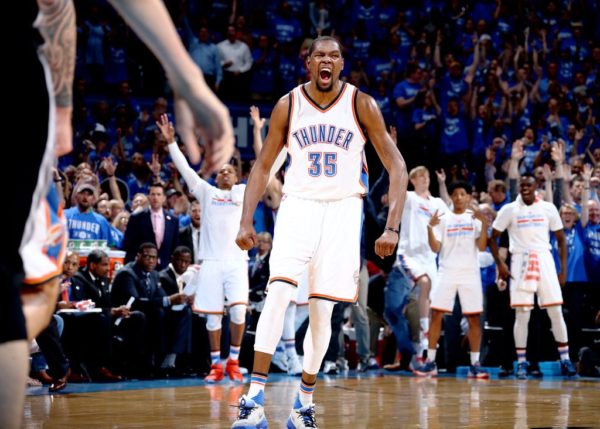 The Oklahoma City Thunder are moving on to the Western Conference Finals, having vanquished the San Antonio Spurs 113-99 in Game 6 Thursday night.

As incredible as this series was, Warriors-Thunder is about to be 🔥🔥🔥.

The 67-win Spurs, meanwhile, are headed toward a summer of uncertainty.

Oklahoma City lost 124-92 in Game 1, but first-year coach Billy Donovan led the Thunder to victory in four of the next five. Oklahoma City controlled Game 6, leading by as many as 28 points.

Westbrook said the Thunder never lost confidence. […] “We had that game, and we left it behind us,” he said. “We came out after that and had a different mindset. We knew what we had to do to win the series. They’re a great team. They’ve been winning for 10-plus years, same pace. I’m just proud of our guys.”

The Spurs were trying to extend the winningest season in franchise history after going 67-15. The 40-year-old (Tim) Duncan struggled for much of the series before scoring 19 points as San Antonio tried to fight back in the fourth quarter. […] Kawhi Leonard scored 22 points and LaMarcus Aldridge added 18 for the Spurs. San Antonio lost just once at home during the regular season, but the Thunder beat the Spurs twice in San Antonio during the series.