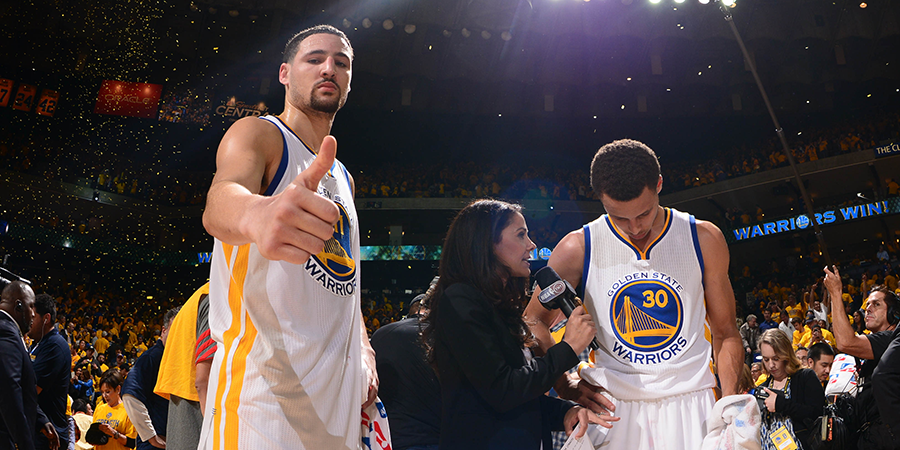 The Golden State Warriors took a 2-0 series lead Monday night over the New Orleans Pelicans, thanks to Klay Thompson’s big fourth quarter—the other half of the “Splash Bros” poured in 14 of his 26 points in the decisive stanza.

Warriors head coach Steve Kerr wasn’t entirely thrilled with his team’s play, knowing things will only get tougher as the first round series shifts to New Orleans.

The one thing Kerr was happy about, is the Dubs’ defense.

The top-seeded Warriors held homecourt, backing up a Game 1 win with a 97-87 victory in Monday night’s Game 2 and sending the best-of-seven, first-round series to New Orleans with a reinforced respect for the Pelicans. […] “I was happy with the energy, but the focus was sporadic,” Warriors head coach Steve Kerr said. “We obviously had enough intensity the whole game, but our focus waned a couple of times. There were a couple of stretches when we started over-dribbling and attacking in places where there wasn’t space. […] We’ve got to put four quarters together.”

After flirting with wasting a 25-point lead Saturday, the Warriors went right down to the wire with the Pelicans again Monday. Klay Thompson scored five points in 92-second span to turn a one-point lead into a 92-86 advantage with 3:34 on the clock. […] The teams went without a basket for the next two minutes, until Thompson snapped the drought with a three-point play that put the Warriors ahead 95-86 at the 1:32 mark. The Warriors, who allowed only nine field goals and 35 points in the second half, didn’t allow a basket for the game’s final 4:42 and yielded 37.8 percent shooting for the game.

“The defense was fantastic,” Kerr said. The Pelicans “are a handful. We know that. Between (Anthony) Davis, their three-point shooters and penetration from (Tyreke) Evans, you’ve got to cover a lot of floor. … It’s a lot to ask, but we feel like that’s the identity of our team: our defense and our versatility at that end.”