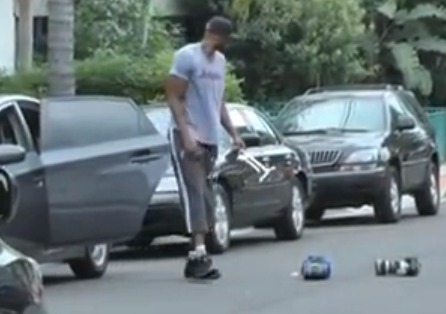 Being a celebrity (and being married to another celebrity) has its pitfalls, as Lamar Odom has learned over the years. The NBA star struck back against the relentless paparazzi by smashing their camera equipment on Wednesday, and hitting their car during the rampage. TMZ has the scoop: “The violent incident was captured on video where Odom was seen going into the back of a car belonging to one of the paps, and chucking all of the guy’s equipment into the middle of a busy street. He then walked across the street and smashed another photog’s car with a metal bar, then picked up all the gear from the street and put it in his trunk. Curiously, right after raging against the paps, Lamar also had a run-in with a fan — and couldn’t have been nicer. […] It’s unclear why Lamar was so angry … when the video starts he’s already digging through the pap’s car. One of the photogs has filed a police report for vandalism.”