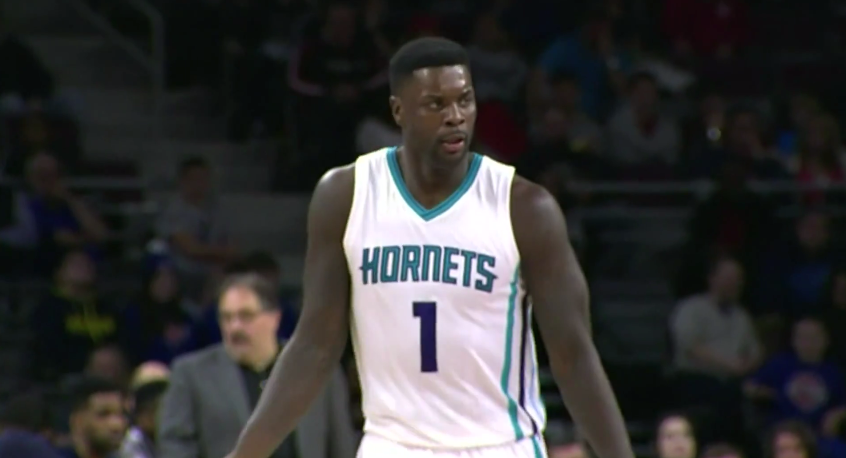 On an isolation play in the fourth quarter Sunday, Lance Stephenson broke Anthony Tolliver’s ankles for an open jumper, nearly sending him to the floor.

(Best part of the move was the celebratory shimmy shake Lance unleashed.)

Yep…i dont hide when i get crossed or dunked on. It happens. Lol RT @c_mullan12 @warriorsworld @ATolliver44 he real for responding lol

Stephenson and the visiting Charlotte Hornets stormed back to take their fifth straight W, a 108-101 road victory against the Detroit Pistons.

(Hornets coach Steve) Clifford has a mantra: “Defense, rebounding, low-turnover.” It is the formula his team must follow to win. So this game became the great outlier. They gave up basket after basket in the lane and were outrebounded 42-39. (They committed one fewer turnover – 10 to Detroit’s 11.)

So then how did they pull this one off? Center Al Jefferson regained his exceptional scoring touch from late last season and small forward Michael Kidd-Gilchrist was switched to guarding Pistons point guard Reggie Jackson in the second half. […] Jefferson finished the game with 24 points on 10-of-14 shooting from the field. Kidd-Gilchrist held Jackson to four points on 2-of-9 shooting in the second half after Jackson had run up 21 points on 7-of-12 shooting before halftime.

What Kidd-Gilchrist contributed in the second half is illustrative of the compromise the Hornets make to get point guard Mo Williams’ scoring. Williams was again terrific offensively (21 points, nine assists and two clutch free throws in the final minute), but he’s limited defensively. […] “When Mo first got traded here I told him, ‘Man, you are going to love MKG,’” Jefferson said post-game. “That’s what makes him so special – that he can guard so many different guys and he rebounds very well. He’s the captain of our defense. You can always tell when he’s not playing that it makes a big difference.”