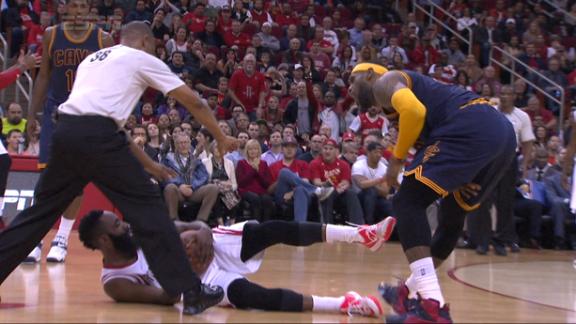 During a third quarter battle for the ball in Sunday’s epic Cavs-Rockets game, James Harden kicked LeBron James where the sun don’t shine.

LBJ was, of course, less than pleased, and wants the NBA to review the play for a possible suspension.

Harden was whistled for a Flagrant One foul, and brushed it off as merely a “reaction”.

“Obviously that’s not a basketball play,” James said. “Obviously the league will probably take a look at it. I have no idea why he would do that, but you know, just two competitors trying to go at it and he won this one.”

Harden called his kick “a reaction.” […] “They called a flagrant,” Harden said. “The next play we moved on.”

The third quarter was chippy in its entirety. James tangled with Houston’s Patrick Beverley (double technicals were assessed) and the Rockets’ Trevor Ariza was also whistled for a technical. […] “I don’t know if it was a physical game, but it was very chippy,” Cleveland’s Kevin Love said. “A couple of plays there kind of got out of hand, but that’s just the way it goes sometimes.”