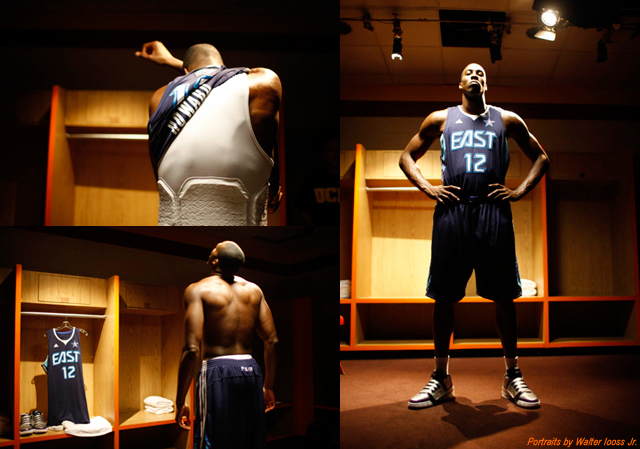 Is anyone else surprised how quickly Dwight Howard has moved to the front of the class in the NBA’s popularity race? What happened to LeBron? DWade and his funny ads? Chris Bosh’s OG viral assault on the L? Apparently all it takes is a 6-10 center with arms the size of tree trunks donning a Superman cape and dropping 20 and 14 and you’re the man. Just like that.

As the coolest cat at the All-Star game this year in Phoenix, Howard will be offering up first-hand footage of his experience all week, on adidas’ site, as this video suggests. Below, I’ve got the big man’s schedule, so you can see exactly what he’ll be sharing footage of as the All-Star weekend progresses. It starts with the release of the “Man Child” and Real Talk (with Kevin Garnett) videos that dropped on Monday. Check the rest:

Fri., Feb. 13: Dwight will immediately start his all-access weekend with his T-Mobile, updating the tiniest amounts of info (what he’s eating and listening to) to the largest (his involvement with NBA Cares in the afternoon and in the Rookie-Sophomore game that night) straight to the adidas basketball website. Dwight will also be interfacing with his fans via Twitter and Flickr.

Sat., Feb. 14: Dwight will host a VIP media event, bringing technology to the court. That technology will specifically be TECHFIT PowerWeb and Padded compression gear. TECHFIT is part of the 2009 All-Star uniform and on Saturday, the league will announce that TECHFIT is now the official compression gear for the NBA. Then on Saturday night, Dwight will defend his slam dunk title. Again, he’ll be updating continuously on adidas’ site all day.

Sun., Feb. 15: Dwight will take his spot in the starting lineup for the East in his third All-Star game appearance and of course, will be adding footage to the adidas site on his experience there. Maybe he won’t add footage while he’s playing (that would be tough), but keep checking the site. I’m sure someone at the stripes will be tracking their main man while he does his thing.

And I thought I’d leave you with a few behind-the-scenes shots from the “Man Child” video shoot, taken by famed sports photographer Walter Iooss, Jr.