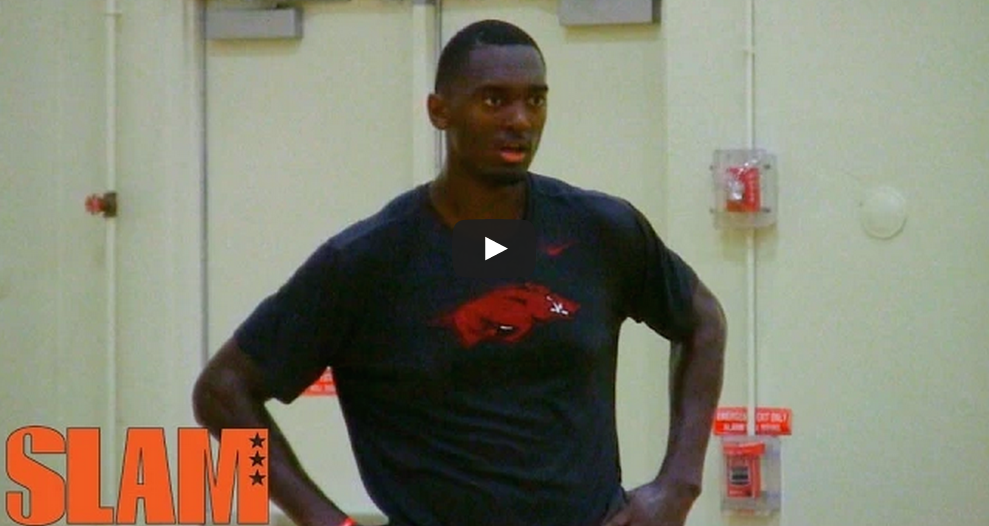 Some players are vocal leaders. You know, the ones constantly hyping teammates up with words of encouragement or by yelling “Let’s go!” after each big play. Others lead by example. While they may not say a lot, you can’t help but be pushed by the intensity and passion that they bring to the floor. Bobby Portis is one of those guys.

Training for next month’s NBA Draft with Tim Anderson and Ryan Thompson in Chicago, it was evident from right after the group got done stretching who the leader was. Going through every drill as if he were auditioning for every NBA GM, Portis looked to rip the rim off every time he dunked, set hard picks, and came off of screens like he was in Game 7 of the finals, while saying very little in the process.

“I’ve never been much of a vocal leader,” he humbly said following the workout. “I’m kind of a shy, stick to myself type of guy.‎ I feel like I bring the intensity that every team needs.”

This was not always the case. Throughout his high school career, there were times in which he played down to the competition. After all, there weren’t too many players his own size floating around Little Rock to give him a legit matchup in the paint. Crediting his change in mindset to Razorbacks coach Mike Anderson, he had a 180 in mentality during his college career and it has brought him to the point of being a potential lottery pick.

“Just always going hard and pushing for that second, third, and fourth effort,” he explained as to what the most important thing he learned from Anderson was. “I felt that in high school, it was kind of easy. In college, it was more physical and I had to bring that second effort to go hard every single play.”

Watching him train alongside Sam Dekker, Cliff Alexander, RJ Hunter, Larry Nance, and Kevin Pangos, you couldn’t tell that effort was ever an issue. He exploded off of the ground and fought for every rebound, had a spirited battle with Cliff Alexander in 3-on-3 play, and provided a physical presence on the defensive end. At 6-11 in shoes and 246 pounds, he has the size to play either frontcourt position, but also has some serious skills to match.

An adept shooter from mid-range, Bobby has the touch to be a serious pick-and-pop threat in the League. You could tell by his competitive nature that he expected virtually every one of his jumpers to go in during the workout. He shot it with consistency out to the collegiate three-point line and if playing alongside a lead guard in the League who knows how to utilize ball screens, exhibited the touch to pose as a viable threat from Day One. On the block, Portis wasn’t quite as refined and while it was clear that he preferred to go to work facing the cup, he showed off much better footwork than we saw during his days as a Razorback. And while he’s not an incredibly explosive leaper, he still finished just about everything around the tin with a dunk.

Still, even Portis admits that his offensive game isn’t what he is going to be drafted for.

“My overall physicality and defense that I bring to a team,” he said as to what he is going to surprise teams with. ‎”I feel like my style of play is going to help me a lot with just being active on defense and going hard. ”

Firmly in the mix for the late lottery, Portis should likely find himself in the green room come Draft day. Physically, he has all of the tools with his size, length, and frame. As far as the intangibles are concerned, you’ve got a guy who just about anyone would love to play with and is just scratching the surface on where his potential. Combine these two and you see why Portis is one of the hotter names in this Draft.