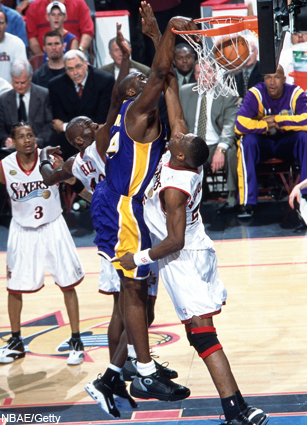 If you do so, you will quickly realize O’Neal was a man amongst boys, a demigod in a world filled with extraterrestrial beings. This is nothing new; we all know this. His physical stature coupled with his desire to be the best to ever do it made O’Neal unstoppable. Shaq did it on his terms, and you could either oblige or get exploited. Six NBA Finals. Four Championships. Three Finals MVPs. Fifteen-time All-Star. Two scoring titles. Fun and games off the court, but physical and mental abuse on it.

I could go on and on about Shaq, and probably should, but for the sake of this post, I won’t. With all the excitement and hoopla currently surrounding the NBA, it’s very easy for people (myself certainly included) to forget the superstars of yesterday as they seep into the periphery. That’s why today, on Shaq’s 40th birthday, we’re here to celebrate. Here to celebrate all that O’Neal accomplished during his playing days, and the fashion in which he did so. Here to celebrate a living legend, one who single-handedly dictated the game of basketball for most of his 19-year career.

Above are 40 of Shaq’s best dunks. We’ve got powerful tomahawks, alley-oops, backboard breakers (literally), vintage high school and college footage and much, much more. There is no particular order, partly because rankings are very arbitrary as is, and partly because this is really about the dunks themselves, not their relative impressiveness or worthiness. The gallery commences with a classic Dick Vitale interview at the 1989 McDonald’s All-American Game, then continues with a plethora of vicious throwdowns. If you’ve happened to forget, this will instantly remind you that nobody does it like The Diesel.

While the 40 plays above aren’t his “best” dunks ever, they are probably the best on this digital library we call the Internet. I—just like I presume you will be—was pretty disappointed in the dearth of footage from Shaq’s days in Orlando, but with all else considered, I do believed this gallery does Shaq justice. So, while whatever you’re doing today is probably very important to your personal existence, if you have any respect for the game of basketball, take a moment to salute one of the, if not the, best to ever do it. Happy born day, Shaq!