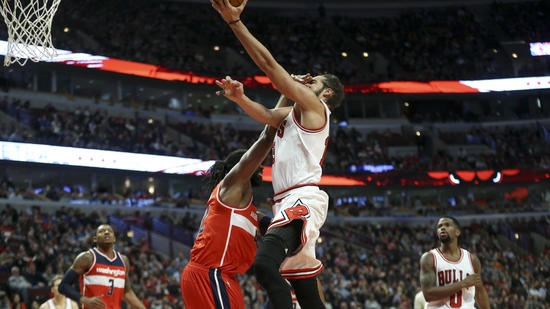 Chicago Bulls center Joakim Noah is all about non-violence, and it’s just not lip service with him.

Noah restrained himself from retaliating, following a vicious whack across the face Tuesday night from Nene.

Noah smiled, paused and looked away. […] “You know, it’s part of the process,” he began. “And I really don’t know what to say right now. But I’m just happy we won, and I’m happy I kept my composure. You know, I was just trying to put out a video just a couple hours before the game about non-violence. And I’m trying to teach these kids big-picture, you know what I mean? So it wouldn’t have been a good look. Not today. Not today, you know what I mean? Not today.”

So Noah kept his calm on Tuesday, and Nene got the flagrant foul. Noah did, though, have quite a few words for Nene after the play. Quite a few. […] Ultimately, the Wizards big man fouled out with no points and six rebounds in Washington’s loss; he declined to speak to the media. Noah had 14 points and 12 rebounds for Chicago.

Still, the game likely won’t calm the tension between the two teams. Nene was ejected after a skirmish in game 3 of last year’s playoff series, which prompted a Noah remark about “roid rage.” There was another skirmish this preseason, which led to a one-game suspension for Nene and others. Earlier this week, Nene said “I don’t want to talk about Chicago. You know I hate them. You can put that.”