OKC Thunder Drop 71 First Half Points on the Lakes (VIDEO) 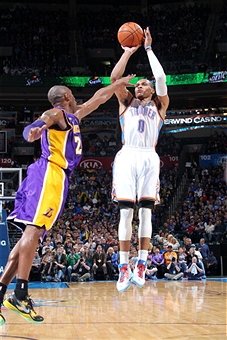 Though the Los Angeles Lakers made things interesting midway through the fourth quarter, it was clear from the beginning that they had run into a buzzsaw and would not survive. The OKC Thunder jumped on their foes early and often, posting a season-high 71 points in the first half (while only coughing up the rock twice the whole game, which is an NBA record).