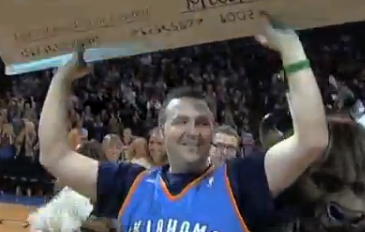 We’ve watched a few fans hit halfcourt shots at NBA arenas this season—one got tackled by a deliriously happy LeBron James in the ensuing celebration, another walked away with a brand new whip. One lucky gent in OKC last night nailed the most important and meaningful heave of the season. Heath Kufahl won $20,000 which he will use to help pay for his wife’s battle with cancer. Per the Oklahoman: “Fan Heath Kufahl, the volleyball and boys basketball coach at Christian Heritage Academy in Del City, Okla., made the MidFirst halfcourt shot between the third and fourth quarters of the Thunder-Lakers matchup to win $20,000. It was the fourth fan halfcourt shot made in the Thunder’s Oklahoma City history, and the first since 2011. It’s always cool to see someone make that shot, but for the Kufahls and their seven children, it means a bit more: Heath’s wife, Jenni, was diagnosed with Stage 3 colon cancer in October of 2012. The money will be used for mounting medical bills.”

UPDATE: It turns out that Heath is actually a Los Angeles Lakers fan, who went undercover and snagged himself a cool $20k. Per the OC Register: “I’m actually a Lakers fan. Don’t tell anybody. I had to wear a Thunder shirt.”