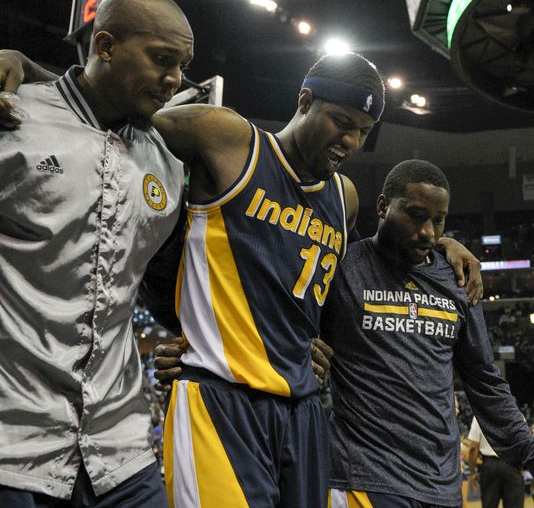 Indiana Pacers fans had a collective heart attack Wednesday night, after Paul George heard a pop in his left leg (not the one that was injured in horrific fashion last summer.)

George left the season-ending 95-83 road defeat to the Memphis Grizzlies in the fourth quarter with a strained calf muscle, but said he’s not too worried about it.

Thank you Memphis and all my fans!! It's been my toughest year by far but looking forward to my greatest summer ahead!

The loss knocked the Pacers (38-44) out of Playoff contention.

Only six games back from one horrific leg injury, George felt a strange sensation in his other, healthier leg, and the story of a season spiraling out of control with injuries started right where it began – with the franchise’s best player hurt. […] Inside a quiet Pacers’ locker room where the only sound was the water pressure from the showers, George spoke in a low voice. He tried to highlight the positives after enduring this latest setback, but judging from his somber tone, George had a tough time searching for the silver lining.

“Just came off a screen and felt a pop, but they looked at it and it’s nothing more than just a calf strain,” George said, slowly. “It wasn’t a knee injury but it’s tough, you work so hard in rehab and have something else pop up. The good thing is, I know we’ve got a long summer and a lot to look forward to.”

As the Pacers faced another must-win scenario on Wednesday, coach Frank Vogel had intended to increase George’s workload to up to 20 minutes. However, George had barely surpassed 15 minutes when he felt the calf pain on a non-contact play. As the Pacers’ season was slipping away early in the fourth quarter to the Grizzlies, George contested Vince Carter for a rebound that Indiana eventually won. Though George got tangled up and wobbled a bit towards the baseline, he said he was fine from that physical play. On the reset, however, George called for a baseline screen from teammate Ian Mahinmi. George faked left, then cut back to his right and that’s when he heard the worrisome noise. […] “I just felt it,” George said. “I knew it wasn’t nothing good.”