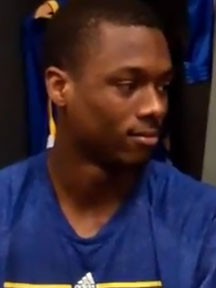 With seven players in their rookie or sophomore seasons, the upstart Warriors are building around a foundation of young talent. Combined with blossoming fourth-year guard Stephen Curry, and veterans David Lee, Carl Landry and Jarrett Jack, the team has achieved the often elusive balance between building for later and achieving success now.

“We don’t care who’s the leading scorer,” says second-year shooting guard Klay Thompson, “We don’t care who gets the most rebounds, we don’t care who takes the last shot, the only thing that matters to us is the number of wins in the win column. We’ve been doing a good job of that this year, just playing unselfish basketball.”

While the season is still early, the Warriors have been able to see tremendous output from recently extended Curry, who was hampered by recurring right ankle injuries the past few years. “Steph’s a great player…every year he’s gotten better. He’s a really good shooter…he’s also a great playmaker and a really good defender. People don’t give him enough credit for that,” says Thompson.

Thompson gives credit to the offseason for the team’s current success. “We brought in some great pieces as well in Jarrett Jack, Carl Landry and Andrew Bogut and had a great Draft, so we got a really balanced attack this year. We don’t depend on one person to win us games, it’s a collective effort.”

Bogut, the centerpiece of last season’s Monta Ellis trade, has been limited to four games due to an injured left ankle. Although the Warriors have yet to see the potential of Bogut manning the inside, the current group on the floor has more than picked up the slack.

SLAMonline caught up with one of new additions making big contributions—2012 seventh overall pick Harrison Barnes. Barnes, who played two seasons at UNC, has started every game for Golden State. He talks about his rookie season, the impact of veterans and his “welcome to the NBA moment.”