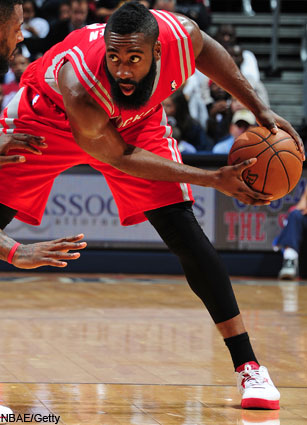 In life, sometimes you don’t know which actions have the most impact—the moves you make or the ones you don’t. Sometimes a situation makes you who you are and sometimes it holds you back.

The Thunder—who already locked up Kevin Durant, Russell Westbrook and Serge Ibaka with extensions—gave Harden an offer and a timetable. With no agreement, he was traded to Houston, called a “foundational” player by GM Daryl Morey and signed to a max deal—likely $25 million more than he’d be making with Oklahoma City.

“Sometimes, it’s a game of changes too,” says Harden’s teammate Daequan Cook, who was also traded to the Rockets.

While Harden had a great run with the Thunder, reaching the Finals and winning Sixth Man of the Year, he may have maxed out his potential as a sub. When players sign contracts, they are not only playing for their current deal, but setting up a situation for the next. With a switch of uniforms, Harden went from being the third option to the franchise player.

In his Rockets debut, Harden dropped 37 points and 12 assists to record his first career double-double. In his second game, he continued to look more than comfortable as the first option, scoring a career-high 45 points against the Hawks.

Cook is not surprised by his teammate’s inspired play. “It’s always been in him but he always played behind Russ and KD. Now, he has the opportunity to show the world what he’s always been capable of doing—being that focal point of the offense or the team. And he’s doing that right now, by being very aggressive on the offensive end, and just playing his game, what he’s always been able to do.”

Does his start with the Rockets give a glimpse into how much he sacrificed with the Thunder? “No question, no question,” says Cook, “He sacrificed a lot. That’s the thing about it, James is the type of player that’s going to do that–whatever it takes to win. He did that and it showed. Tonight, him being on a new team, it just showed what else he was capable of doing–being a focal point of the team.”

While the season is just beginning, one thing is clear: We have so much more to see from James Harden.