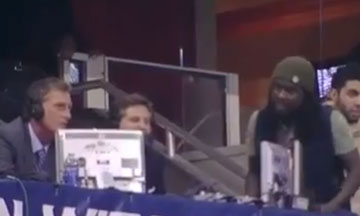 The Toronto Raptors play-by-play duo of Matt Devlin and Leo Rautins had never heard of Wale until last night (who could blame them, really?), and they took shots at him during the broadcast after the rapper and Rudy Gay began to trash talk good-naturedly. After the diss, Wale walked up to where Devlin and Rautins were sitting to give them a piece of his mind. The WaPo breaks down the hilarity: “So, Wale is inspiring, and I’m sure somebody on Twitter can tell me exactly if they’ve ever heard of Wale,’ Devlin said on the Toronto broadcast. ‘He’s not Drake, that’s for sure.’ Burn. The Drake dis made its way to Wale at the speed of light, and the D.C.-based rapper responded on Twitter. He also decided to take his objections to the broadcast booth in person during the third quarter, which was about 20 rows directly behind where he was seated. During the live broadcast, because why not. ‘I was just introducing myself, that’s all,’ Wale said. ‘Nah, I wasn’t angry. I was like, you’re not from here, you don’t know. You don’t know.’ […] The fans in the suite with front row seats to the incident (who did not want their names on record) said that Wale was yelling ‘I heard what you said. That’s not cool.’ I caught up with Devlin after the game, and he said any ‘yelling’ was a product of the loud arena, and that any beef was Twitter’s fault. ‘You know what, we were making fun of ourselves. Making fun, because we’re not hip,’ he said. ‘Obviously people on Twitter and social media, it kind of took on a life of its own. So he came up, we started talking and there was nothing to it.'”