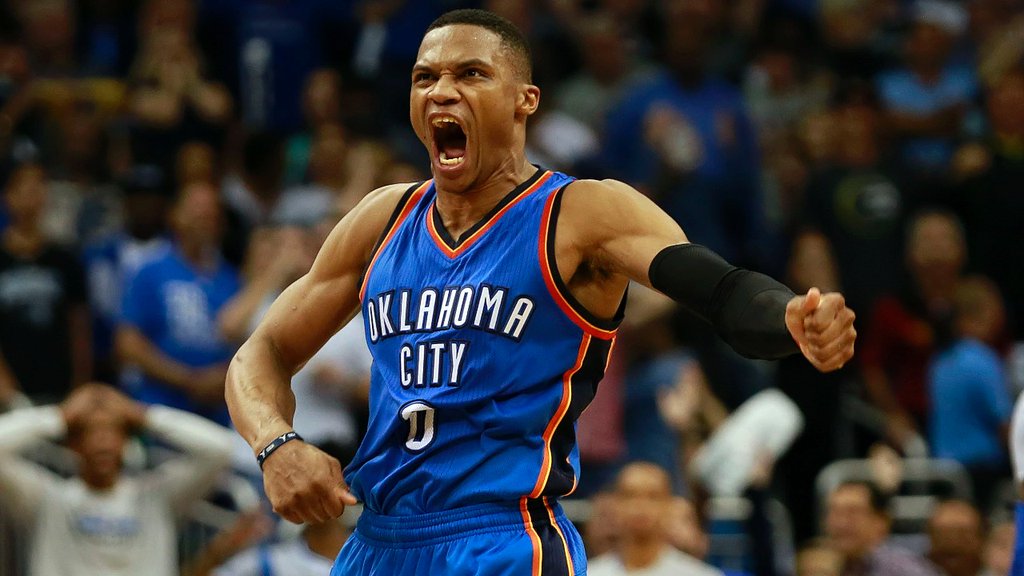 The OKC Thunder’s lone trip to D.C. was supposed to be all about Kevin Durant and his impending free agency, but Russell Westbrook stole the show Tuesday night.

KD on the booing: "They were? I don't care." pic.twitter.com/oU6mTwsW6m

Russ notched his first triple-dip of the season—22 points, 11 boards and 11 assists—in just three quarters of work, as he led the Thunder to a 125-101 blowout of the Washington Wizards.

Durant was forced to leave the game at halftime with a left hamstring strain, and is scheduled for an MRI today.

Likely due to Durant’s recent comments about the “disrespectful” nature of cheering for an opponent, the Wizards crowd barely made a peep when he was announced pregame. There was even a ‘KD stay in OKC’ sign spotted in the lower bowl. Then every time he touched the ball during the first half, light boos sprinkled down. […] “They were?” Durant asked of the fan’s booing. “I don’t care.”

Led by KD’s quietly dominant 14 points and 10 first half rebounds and Russell Westbrook’s loud 12 points, eight rebounds and six assists before the break, OKC burst out to 68-50 halftime lead. The Thunder lead only widened from there. […] OKC’s offense looked crisp. Dion Waiters popped 25 points off the bench. Westbrook finished with a 22-point, 11-rebound, 11-assist triple-double in only 28 minutes. All 13 active Thunder players scored.

On a slicing drive with 54 seconds left, Durant was fouled by Kris Humphries and landed a bit awkwardly on his left leg. He immediately grabbed his hamstring, grimacing and reaching for it the rest of the half. Durant slowly went to the halftime locker room with Thunder trainers by his side. He didn’t return, icing and watching the Thunder blowout from the bowels of the Verizon Center with what the team deemed a left hamstring strain. […] “I mean, I can walk,” Durant said postgame. “It’s just a little sore.”