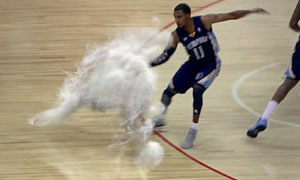 Spike Lee’s latest metaphor-filled spot may be his best yet. It opens with footage of Chris Paul going head-to-head with Grizz PG Mike Conley before the Clippers star disappears in a cloud of smoke. CP3 star lands himself at a diner, across from Lakers guard Steve Nash and Hall of Famer Magic Johnson, who might just be plotting a the Lakers’ power takeover. CP grabs a fry before reappearing on the court and hitting his shot. Check out the behind-the-scenes interview with Magic and Chris talking with one another and Spike giving background commentary.