The Return of DRose Commercial: ‘Wake Up’ (VIDEO) 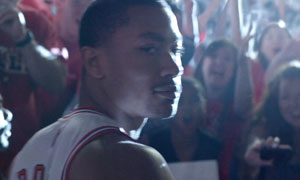 Derrick Rose and adidas debuted a new commercial, which will air next week in conjunction with the worldwide launch of the DRose 3 and DRose Signature Collection on October 4. More details on the spot from our friends at adidas:

“Wake Up” captures the time-stopping shock and disbelief felt by fans across Chicago as their favorite son’s season came to an end. Then, inspired by Derrick’s intense, focused workouts and determination, and coupled with gritty, authentic sounds from the Windy City, fans wake up and come back to life. The spot ends with Derrick walking through the player’s tunnel at a frenzied Chicago Bulls home game at the United Center to build anticipation and excitement for his return.

The spot showcases that every step Rose takes toward recovery isn’t just bringing him back, it’s bringing all fans back.

The commercial was shot in multiple Chicago locations including Lake Street Bridge and South Side neighborhoods and parks. Derrick Rose footage and audio used was captured during “The Return of DRose” documentary series filming at the Berto Center. The spot features the in-game call from TNT’s Kevin Harlan and cameos by iconic Chicago sports anchor Dan Roan and Derrick’s brother Reggie Rose.

“Wake Up” continues “The Return of DRose” conversation fans can joined at the adidas Basketball Facebook Page, adidasbasketball.com/thereturn and on Twitter with #TheReturn @adidasHoops.