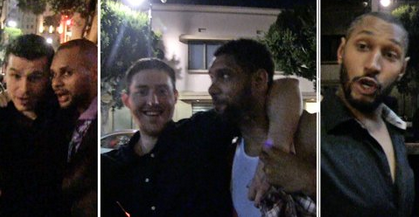 After enduring a crushing 111-109 Game 7 loss to the LA Clippers, the defending NBA champion San Antonio Spurs took out their frustrations at a Hollywood nightclub Saturday night.

Several Spurs could be seen drunkenly stumbling out of the establishment in the wee hours, as they headed towards the waiting team bus.

Tim Duncan dragged teammate Aron Baynes out of the club, and helpfully told him to “shut the f*ck up” with the paparazzi closing in.

Tony Parker, Tim Duncan, Boris Diaw and the rest of the squad hit up Project Club L.A. in Hollywood on Saturday right after losing a Game 7 thriller to the Clippers.

You gotta check out the clip — Aron Baynes was in especially rare form … with Tim Duncan telling him to “Shut the f**k up” as he dragged the seemingly hammered 28-year-old down the street.

The whole thing is pretty hilarious … but props to the Spurs for making sure all the players had a safe ride home.