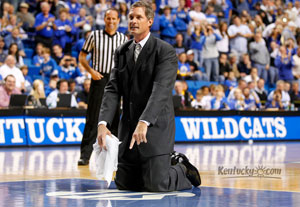 Almost two decades after Christian Laettner hit a buzzer-beater against Kentucky in the 1992 NCAA Tournament, Wildcat fans finally saw him ejected from a game Monday. Serving as the coach of the UK Villains, Laettner gave the crowd what it wanted by orchestrating his own ejection in the final minutes of regulation. Laettner wiped up a wet spot on the court during a timeout, paying extra attention to the free-throw line where he, while at Duke, sunk the iconic turnaround jumper in the Tournament regional final.

“We knew we were going to get me tossed but when somebody started slipping on the floor, a fan behind me yelled, ‘Laettner, wipe up their sweat!” Laettner said after his team’s 152-149 win over the Big Blue All-Stars. “That wasn’t pre-planned, I just thought it was a good idea.”