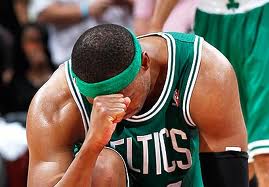 Paul Pierce capped his monster Game 2 performance last night by hilariously pulling the infamous Tim Tebow celebration/prayer. From the AJC: “The Celtics’ first few plays – all designed for Paul Pierce — were scripted. His Tebowing moment, well, that was not. Pierce scored the Celtics’ first nine points en route to a game-high 36 points in an 87-80 victory over the Hawks Tuesday night at Philips Arena. He also scored nine of their final 13 points to even the Eastern Conference playoff series a game apiece, sending it to Boston for Games 3 and 4. ‘He was a monster,’ Celtics coach Doc Rivers said simply. The load was heavy for Pierce as the Celtics were without all-star point guard Rajon Rondo, suspended for Game 2 of the series after bumping a referee. He also grabbed a game-high 14 rebounds, 13 on the defensive glass, and had four assists. During a timeout late in the game, with the Celtics holding a comfortable lead, Pierce stopped at midcourt and got down on one knee. A Tim Tebow gesture right on the Hawks logo. ‘It just came to me,’ Pierce said.”