The Cost Of Winning 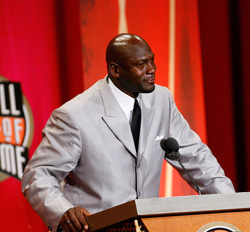 Sitting on the floor, way too close to the TV, my eyes were fixated on what was happening in front of me.

Bucket-by-bucket, Michael Jordan was carving the L.A. Lakers up in the 1991 NBA Finals. It culminated in MJ’s completely unnecessary last-minute decision to turn a thundering dunk into a gorgeous left-handed, over-the-head lay-in off the glass. Marv Albert had a reaction just shy of ejaculation and the basketball-viewing world’s jaws collectively hit the floor. And with that, I was hooked.

Sitting on my couch, hunched forward watching him on YouTube, I watched as tears rolled down his cheeks while his greatest accomplishments played in front of him. He took the stage in Springfield, straddling a point of transition in his life. And then he spoke.

What he’s said, how he said it, has caught flak in the last few days.

Adrian Wojnarowski at Yahoo! has been at the forefront of the charge, tearing into Jordan after the speech for citing slights with past opponents, for being petty about his successes and an inability to let them go.

I’m left wondering though, was an

yone surprised by this?

Jordan got up on the stage and showed us who he is. He showed us what it took for him to get to that level that allowed him to succeed night after night, year after year.

In his speech, he often made reference to logs on the fire. These translated to MJ storing away all of the slights, doubts from his peers or the media and using them as motivation to prove his detractors wrong. Those slights ranged from the big—being cut from his varsity high school team in favor of Leroy Smith—to the small—being left off of a Sports Illustrated cover as a freshman while at UNC.

As Jordan’s success mounted in the NBA, the stories of his competitive nature become more and more common. Those stories of the logs on Jordan’s fire were also logs on the fire of his legend. The more competitive MJ revealed himself to be, the more he was lauded for it.

If for nothing else, Jordan is unique in professional sports for the amount of success he had in his career. Save for the years of his first retirement, he led the League in scoring from ’87-98. He went six-for-six in the NBA Finals. You could say that from 1987 onwards, Jordan was the top dog in the NBA. In his last three seasons with Chicago, the expectations were through the roof for him and the Bulls. With the pressure on him every single night for those three years, Jordan led those Bulls teams to win totals of 72, 69 and 62, respectively, all en route to NBA titles.

Jordan never tasted failure in Chicago. He never came up short, wasn’t humbled. While he was mediocre in Washington, those years have been washed away. They’re a blip on the radar that very few have paid attention to, especially in the weeks leading into Jordan’s induction into the Hall.

In his heyday, Jordan played on a stage that was unparalleled for any other NBA player. He had to be the best every night, had to win, had to bring home championships and MVP’s. Had to carry the load, had to carry the expectations of millions of fans, of David Stern, of NBC executives. Really, he was set up to fail. And with the weight of the world on his shoulders, he shook the pressure off like it John Starks on the baseline, spun back and dunked the expectations in everyone’s faces.

y, in a sense, a monster was created. It’s impossible to be that competitive your whole life and then turn it off when your playing days are done. The traits that put the world in Michael Jordan’s hands are the same ones that have been chastised in the days following his Springfield speech. Wojnarowski said in his piece that “Jordan didn’t hurt his image with the NBA community as much as he reminded them of it.”

If there’s anyone that should understand MJ at all, it’d be the NBA community. In the Jordan montage prior to his speech, Scottie Pippen showed that understanding and said a lot about his former teammate.

“Winning is hard to do,” he said. “And It’s a price that you pay for it and that’s how I saw Michael as a player: as someone that wanted to prove that he’s a winner every day.”

Jordan’s candor on Friday showed that he’s a winner and the cost that it came at. He’s not the guy that I’d want to have any kind of contest with (I picture him keeping a table full of people up, bleary-eyed at 5 in the morning until he won a round of poker) but even today, I’d put my money on him for a five-minute stretch through the final stages of a tight game in the NBA. Because nobody won like Michael Jordan.