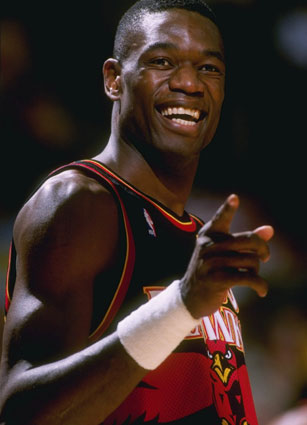 In honor of his 45th birthday, here’s video of Dikembe Mutombo at several points in his NBA career. One of the greatest shot-blockers ever, Mutombo’s defensive impact was much greater than indicated by the box score, as entire offensive gameplans were hindered by his relentless mindset on the boards and in the paint. Off the court, Mutombo is a well-known humanitarian, helping in various efforts across the globe. With Dwight Howard, Josh Smith, Serge Ibaka and others on the defensive rise, it’s time to pay homage to a legend. An 8-time All-Star, 4-time Defensive Player of the Year, and model citizen, Mutombo is a solidified icon, not  just athlete. Happy Birthday, Deke!