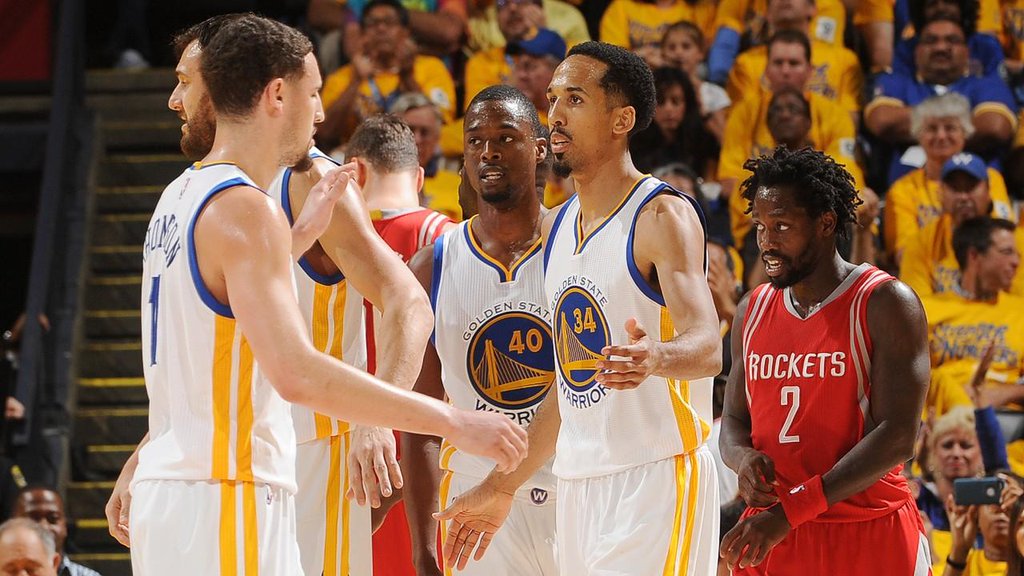 Stephen Curry’s bum right ankle kept him on the sidelines Monday night, but the Golden State Warriors still took care of business and took a 2-0 series lead against the Houston Rockets.

Klay Thompson scored a game-high 34 points, and the Dubs had important contributions from Andre Iguodala, Draymond Green and Shaun Livingston.

.@KlayThompson: "I'm mesmerized by @ShaunLivingston. You can't ask for a better back-up point guard in this league." pic.twitter.com/U0a1vrKnkn

James Harden paced the Rockets with 28 points and eleven boards.

“We’ve relied on our depth all year, not just when Steph’s out,” Draymond Green said. “I think we’re the deepest team in the NBA.” […] Thompson scored 34 points and dished out five assists and the Warriors held off the Houston Rockets 115-106 on Monday night to take a 2-0 lead in their playoff series despite no Curry, sidelined because of an injured right ankle.

“Ahh, it’s so much easier without him out there. When Steph’s out there, his man just sags in the paint, he doesn’t move the ball, he’s a very selfish teammate,” cracked Thompson. “I’m just kidding, man, he’s the exact opposite of that. I think we showed it’s hard to fill that void. No one’s going to do it by themselves.”

Andre Iguodala, last year’s Finals MVP, added 18 points with four 3-pointers and Green had 12 points, 14 rebounds and eight assists. He didn’t commit a turnover in 39 minutes, his longest stretch without one in the regular season or playoffs. […] Shaun Livingston, who left Sunday’s practice with an illness, had 16 points and six assists playing in Curry’s place.