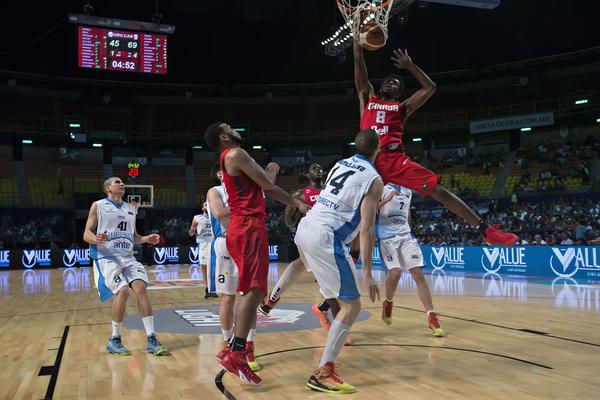 Andrew Wiggins has put several people on posters this summer during international player, and some faceless defender from Uruguay became the NBA Rookie of the Year’s latest victim Monday.

Wiggins and his Team Canada squad took down Uruguay 100-82 at the FIBA Americas tournament in Mexico City.

The Canucks are now riding a five-game winning streak, and have enjoyed an average margin victory of roughly 30 points.

Things will get quite a bit more challenging on Tuesday night, when the unbeaten hosts, supported by a rabid, likely sellout crowd, will be eager to pull off the upset. […] Andrew Wiggins again led the way with 18 points, including some highlight-reel dunks, Andrew Nicholson sprang to life with 15, Nik Stauskas notched 11 and four other Canadians cracked double-figures.

Uruguay, 0-5, yet still more competitive than some of Canada’s opponents so far, fought back after getting down by a 13-3 margin early, but Canada led by seven after one and it never got that close again. […] The lead had ballooned to 25 points at the half and to 34 through three.

“I think as the game went on I was pleased with how we were able to adapt to a different style of game than we’ve seen so far in this tournament,” head coach Jay Triano said. “I think that helps our growth as a team and gives these guys some experience as to what a very well executing team can do to us.”