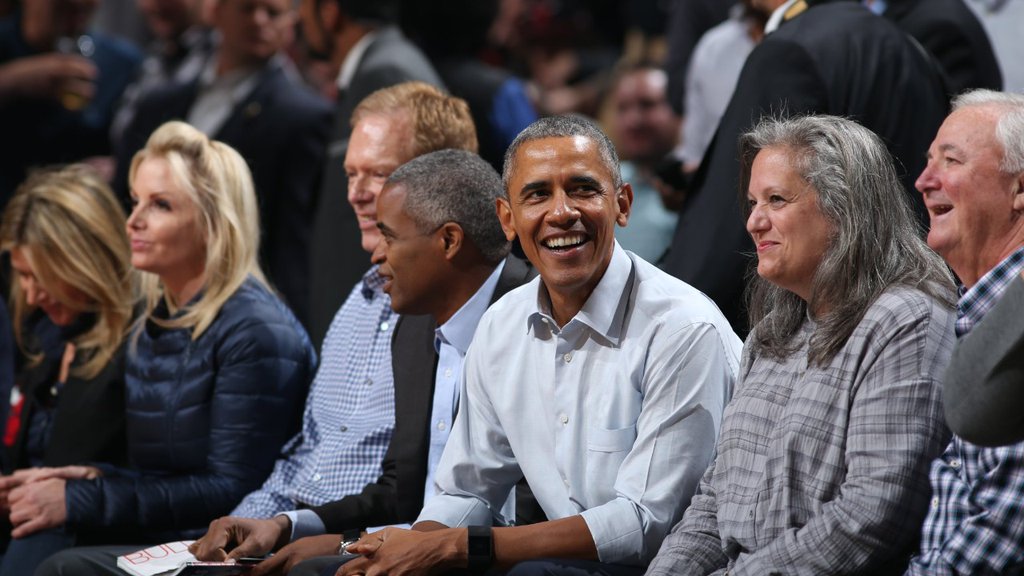 Good to be home for a night. Even better to see the @chicagobulls start the season off right! #SeeRed

Obama used the national TV spotlight to promote his “My Brother’s Keeper” initiative, which is supported by the NBA and its teams.

“About a year and a half ago, people were saying I was a lame duck,” Obama noted wryly at a Democratic National Committee fundraiser at the Pump Room restaurant, where about 80 guests had paid up to $33,400 each to dine on chicken and polenta in the company of the president. […] Instead, he said, “We’ve been flapping our wings a lot.”

A tieless Obama arrived on the court for the start of the second quarter, shaking hands with spectators in the front row and waving to others out of his reach. He removed his suit jacket as he took a seat next to longtime pal Marty Nesbitt, a businessman and chairman of the Barack Obama Foundation, which is planning for Obama’s future presidential library. […] Obama gave a brief interview to TNT, thanking the NBA for supporting his “My Brother’s Keeper” initiative to help boys and young men of color.

“It’s a program to make sure that all of us are supporting disadvantaged youth and particularly disadvantaged boys,” he said. “The NBA stepped up, every team in the league is sponsoring mentorship programs.” He noted that his wife, Michelle, appeared with (LeBron) James in Akron, Ohio, last week to promote his college scholarship program. […] “That kind of character that we see in the NBA is really making a difference,” Obama said.