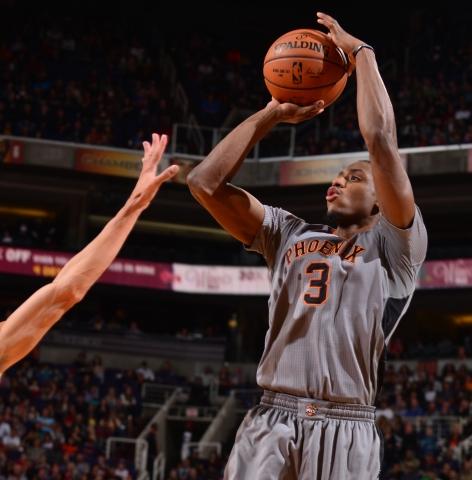 Playing against a rag-tag backcourt combo, Brandon Knight and Eric Bledsoe torched the visiting LA Clippers to the tune of 63 points Thursday night, as the Phoenix Suns enjoyed a 118-104 home victory.

Knight’s 37 points were a career-high; Bledsoe finished with a near triple-double of 26 points, 10 rebounds and nine assists.

The Clippers, to no one’s surprise, were very upset with All-Star forward Blake Griffin’s first half ejection.

The Clippers (5-4) had closed a Suns lead to 49-48 on a Griffin spinning post move before he complained about a no-call for Tyson Chandler contact on his score. That earned him a technical foul and an ejection because of an earlier double technical foul with Mirza Teletovic. […] “I just thought it was awful,” Clippers coach Doc Rivers said. “He didn’t say enough.”

The Clippers went without J.J. Redick (concussion) and Chris Paul (groin strain) and started a lineup that had never played together this season. With Austin Rivers and Pablo Prigioni starting as the Clippers guards, the Suns starting backcourt outscored them 63-17.

Knight came off a career-high tying eight turnovers Sunday to for a career-high tying 37 points on Thursday, matching his Dec. 31, 2013, career high with Milwaukee against the Lakers. He opened the Suns’ scoring during a 17-5 run with a catch-and-shoot 3-pointer on a Bledsoe drive-and-kick. Knight hit an array of shots from there, pulling up in transition for three more 3-pointers, dribbling off screens four times for mid-range jumpers and driving by four different defenders on five occasions for layups or floaters. […] “They were pretty consistent with what I’ve been getting, the same shots I got the first time we played the Clippers,” said Knight, who made four of 20 shots in the Suns’ loss to the Clippers. “It just went down tonight. I’m just continuing to be consistent, working on my game, continuing to be confident and those shots will fall.”