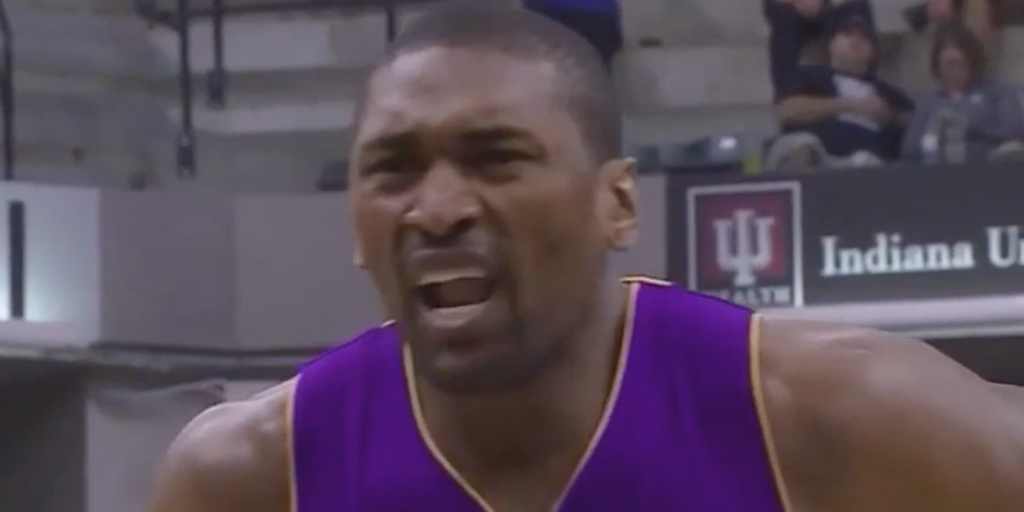 Metta World Peace has been hooping for a long time and still loves lacing ’em up. During last night’s Lakers loss to the Pacers, Metta shot a free throw then, with the cameras zoomed in on him, screamed out “I love basketball:”

Of course, Metta’s most notorious moment as an NBA player came when he was the central figure in the now famous “Malice at the Palace” as a member of the Pacers. With Artest back in Indiana this week, ESPN‘s Baxter Holmes caught up with the vet and he discussed his disappointment on how his tenure with Indiana ended:

In Indianapolis, World Peace is still known as Ron, and on Tuesday the 36-year-old, now in his 17th season, made what will likely be his final visit as an NBA player, a 115-108 loss for his Los Angeles Lakers at Bankers Life Fieldhouse. World Peace played 2 minutes, 36 seconds and scored two points, both from the free throw line.

Even if World Peace’s career moves on, ever closer to his overall goal of playing for 20 seasons, he said he won’t ever recover from how his Pacers tenure ended, especially because he believed so many people in and around the franchise truly liked him, cared for him, tried to help him at every turn, but he didn’t do right by them.