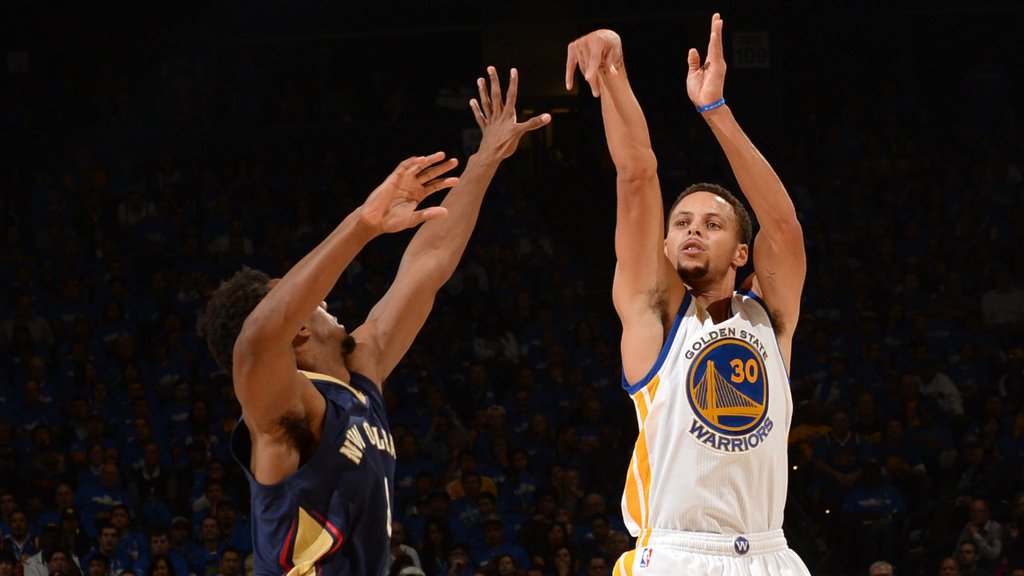 On Opening Night, the Golden State Warriors were handed their rings, and the MVP played like …well, the MVP.

Stephen Curry erupted for 40 points in the Dubs’ 111-95 win against the visiting New Orleans Pelicans.

It became immediately apparent Tuesday that it would be a long night for the Pels, as Curry dropped in 24 points during the opening stanza.

Steph Curry has 40 points…. 3rd quarter ain't even over yet.

The NBA MVP showed in a hurry he hasn’t lost a step or his swagger, scoring 40 points to lead the Golden State Warriors to a 111-95 victory over the New Orleans Pelicans on Tuesday night to open their title defense. […] Curry put on a shooting clinic, hitting seven of his first nine shots with four 3-pointers for 24 first-quarter points. He finished 14 for 26 with seven assists and six rebounds in a rematch of the first round of the playoffs that Golden State swept 4-0. It was his 10th career 40-point game.

“Even just Game 1 of the finals it was just a different feeling,” Curry said. “All that really prepared us to be able to stay in the moment, enjoy the celebration and the ceremony, have fun, joke, dance, all that stuff, but then lock in and focus on the game. It would be disappointing to leave out of here 0-1 with a ring as opposed to 1-0. The mood is a lot better and we want to keep that vibe going.”

(Steve) Kerr said beforehand he isn’t sure when he will be back on the bench but plans to go on the team’s weekend road trip to Houston and New Orleans. […] “It’s killing me not to be out there tonight,” he said. “I’ve got to be patient and that’s probably not my greatest virtue right now.”