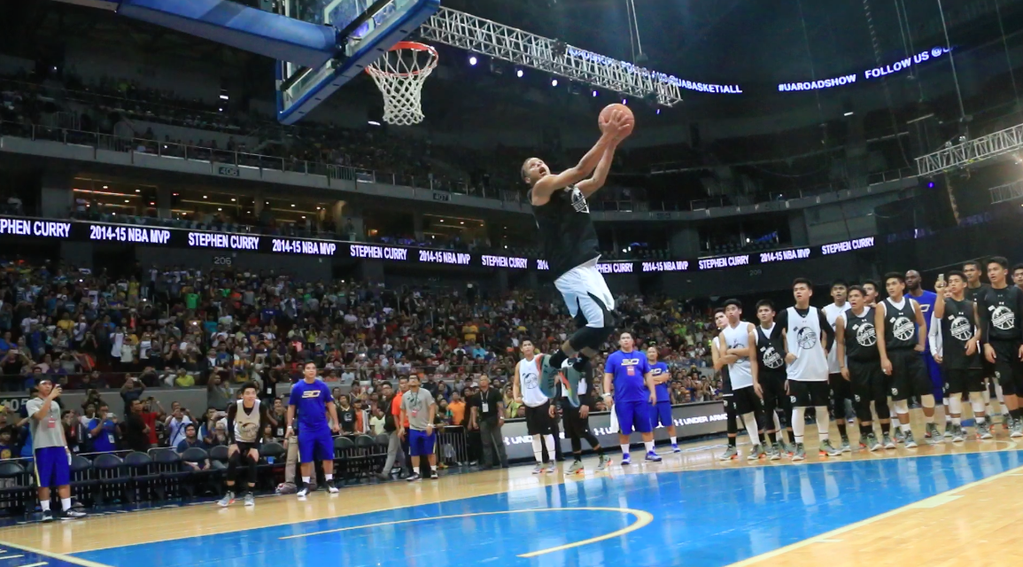 Under Armour is shuttling Stephen Curry around Asia, as part of a promotional push for his latest signature kicks, the Curry Two.

The NBA’s reigning MVP played ball with some kids in Manila, displaying his pristine shooting and ball-handling skills.

Curry even threw down a reverse jam.

During his first Manila visit on Saturday, September 5, the NBA MVP wore a shirt that paid tribute to the legendary bout between Muhammad Ali and Joe Frazier dubbed “Thrilla in Manila,” which took pace on October 1, 1975 at the iconic Araneta Coliseum in Manila. […] Curry’s white shirt bore the text of “Thrilla in Manila” and “Muhammad Ali” in front and “World Heavyweight Championship 1975, Quezon City Philippines” at the back.

“I obviously like to bring a little Manila flavor with a little bit of the States,” the Golden State Warriors point guard explained. “You all know how great Muhammad Ali was.”

The NBA champion visited Manila for a day as part of an Asian tour for his sponsor shoe brand Under Armour. He is promoting his new signature shoe, the Curry Two. The shoe will be launched in China on September 6. […] Curry also visited Tokyo and is now on a 3-city trip in China.