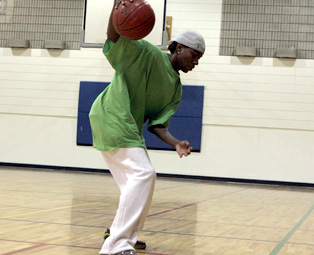 Toronto — The last time there was a major streetball event here in the T-Dot was waaay back in the summer of 2003 — Skip To My Lou, Alimoe and Main Event were in the building for the And 1 Mixtape Tour’s first and only visit to Toronto.

What remains a mystery to me is why they never came back. At the time, I spoke to some of the And 1 reps and they told me that up to that point, there had never been a larger audience for an And 1 Mixtape game, ever.

Strangely, three years have passed since then, and now we have the Killer Krossover Tour coming to the ACC on Thursday night at 7:30pm.

What is the Killer Krossover Tour? I went down to the Scadding Court Community Centre recently to get some answers, where Neil and Andrea from Substance Entertainment Group were hosting the man behind the tour: Philip “Hot Sauce” Champion.

Me: Whaddup Sauce? So what’s going down with this Killer Krossover Tour?

Sauce: We’re basically blowing people out city to city…as y’all know, it’s my tour. I hate really blowing people out but it’s a job so, we have to do that, know what I’m sayin’? We go across, playin’ cats with a lot of skills…but, they can’t find a way to really pull the win. So we’re really looking for talent. We’ve been looking for talent for the last 4 or 5 years…[but] there’s nothin’ out here, you know what I’m sayin’?
Me: What’s the real difference between the And 1 Tour and the Killer Krossover Tour?

Sauce: The And 1 Tour is established. The Killer Krossover tour is under my name and it’s bringing new cats up to get a name. And it’s basically an exposure tour. I [was just over in Hong Kong] (with And1) and killed…I started something…It’s like the butterfly effect of Hot Sauce know what I’m sayin’ and I’m lovin’ it right now. I wanna go overseas, and turn everything around and come back and be set for life.

After the game (in Toronto), all [the] drinks will be on me…(after party @ Fluid Nightclub)
Me: Tell me about the experience of being in the movie, Crossover.

Sauce: Um, the movie was crazy, it was a great experience. It’s me doing something I always wanted to do…something I can fall back on as far as when I get to the end of this streetball career. I got a lot of props…I mean, it’s had its ups and downs, but I got a lot of props for it [considering] it was my first movie…

Sauce: I’m workin’ on that right now. Just gotta wait…good things come to those who wait…

Me: So what’s coming down the pipe for Sauce that you want your fans to know about?

Sauce: I’m hustlin’ right now know what I’m sayin’? Streetball is a hustle, so basically I’m using my name to get what I want. Hot Sauce…that’s my name…and you can put that in bold letters if you want to…

I’m still doin’ my thang. I am who I am, ain’t nothing new, just doing bigger thangs right now. You’re not going to get the Hot Sauce you saw in [the And1] Mixtape 3 you know what I’m sayin’? Cause I’m about business now…my name is a business…so I’m using that…that’s my breadwinner.

So, if you’re interested in checking out guys like Hot Sauce, I’ll Be Right Back, Sik Wit It, High Octane, etc., take on a local T-Dot legends like Mike ‘Ghost’ Zanadine, Donrick ‘Cheeze’ Thomas and Corey ‘Sho Stoppa’ Niles, head down to the ACC @ 7:30pm. Tickets are still available.